The use of hematopoietic stem cell transplantation (HSCT), particularly among children, has increased over the last decades. However, it is frequently associated with a high risk of morbidity and mortality, and HSCT-related adverse effects can potentially impair survivors’ health status. We aimed to assess the effects on major clinical outcomes of a supervised exercise intervention performed by children with cancer during hospitalization for HSCT. The main finding of this prospective study in a quite large cohort of pediatric HSCT recipients (n = 118, aged 4–18 years) is that a moderate intensity supervised exercise program (aerobic + resistance exercises) performed from the beginning of the conditioning phase for HSCT until the end of the neutropenic phase is safe and well tolerated and tends to decrease risk of infections after allogeneic HSCT, as compared with not performing the program.

We assessed the clinical effects of a supervised exercise (aerobic + resistance) intervention performed during inpatient hospitalization for pediatric hematopoietic stem cell transplantation (HSCT). Patients were placed in an exercise (n = 65 (47 and 18 with allogeneic (allo-) and autologous (auto-) HSCT, respectively)) or a control (n = 53 (39 and 14)) group. Exercise interventions were performed in isolated hospital patient rooms. Patients were followed-up from the beginning of the conditioning phase up to 6 years. We assessed survival, risk of graft-versus-host disease (GvHD) or graft failure (primary outcomes), and engraftment kinetics, supportive care, toxicity profile, and immune reconstitution for auto-HSCT and allo-HSCT. The exercise intervention was safe and did not affect the risk of mortality, acute/chronic GvHD, or graft failure (all p > 0.05). No between-group differences (p > 0.05) were found for the remainder of clinical endpoints, except for a reduced number of total and viral infections in the exercise group after allo-HSCT (unadjusted p = 0.005 for both total and viral infections, and adjusted p = 0.023 and 0.083, respectively). In conclusion, exercise performed during inpatient hospitalization for pediatric HSCT is safe and well tolerated during both auto and allo-HSCT and tends to decrease the risk of infection after allo-HSCT. These findings provide additional support to the notion that a multidisciplinary approach (i.e., including the work of exercise specialists) is suitable in the management of children undergoing HSCT. Further studies are needed to determine whether applying a different training stimulus (notably, higher exercise intensities) exerts positive effects on HSCT prognosis in these patients. View Full-Text
Keywords: immune reconstitution; graft-versus-host disease; childhood cancer; infection; exercise is medicine immune reconstitution; graft-versus-host disease; childhood cancer; infection; exercise is medicine
►▼ Show Figures 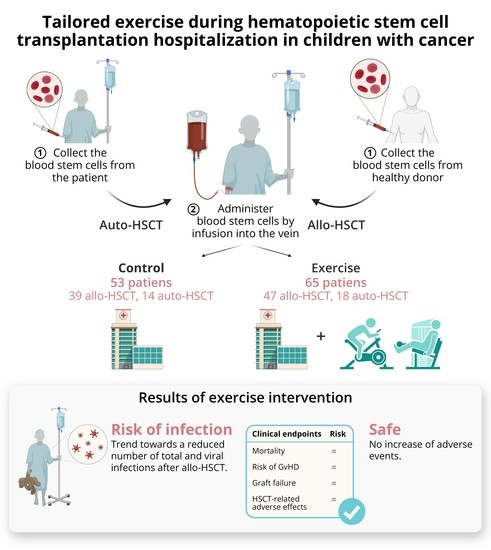