The prognosis for patients with breast cancer that has spread to the brain is poor, and survival for these women hasn’t improved over the last few decades. We do not currently test for asymptomatic brain metastases in breast cancer patients, although this does happen in some other types of cancer. In this study we wanted to find out more about breast cancer that has spread to the brain and in particular to see whether there might be any advantage to spotting brain metastases before the development of neurological symptoms. Overall, our results suggest that women could be better off if their brain metastases are diagnosed before they begin to cause symptoms. We now need to carry out a clinical trial to see what happens if we screen high-risk breast cancer patients for brain metastases. This will verify whether doing so could increase survival, symptom control or quality of life.

Background: Brain metastases (BM) have become a major challenge in patients with metastatic breast cancer. Methods: The aim of this analysis was to characterize patients with asymptomatic BM (n = 580) in the overall cohort of 2589 patients with BM from our Brain Metastases in Breast Cancer Network Germany (BMBC) registry. Results: Compared to symptomatic patients, asymptomatic patients were slightly younger at diagnosis (median age: 55.5 vs. 57.0 years, p = 0.01), had a better performance status at diagnosis (Karnofsky index 80–100%: 68.4% vs. 57%, p < 0.001), a lower number of BM (>1 BM: 56% vs. 70%, p = 0.027), and a slightly smaller diameter of BM (median: 1.5 vs. 2.2 cm, p < 0.001). Asymptomatic patients were more likely to have extracranial metastases (86.7% vs. 81.5%, p = 0.003) but were less likely to have leptomeningeal metastasis (6.3% vs. 10.9%, p < 0.001). Asymptomatic patients underwent less intensive BM therapy but had a longer median overall survival (statistically significant for a cohort of HER2-positive patients) compared to symptomatic patients (10.4 vs. 6.9 months, p < 0.001). Conclusions: These analyses show a trend that asymptomatic patients have less severe metastatic brain disease and despite less intensive local BM therapy still have a better outcome (statistically significant for a cohort of HER2-positive patients) than patients who present with symptomatic BM, although a lead time bias of the earlier diagnosis cannot be ruled out. Our analysis is of clinical relevance in the context of potential trials examining the benefit of early detection and treatment of BM.
Keywords:
brain metastases; asymptomatic; breast cancer

2.2. Overall Survival of Patients with Asymptomatic vs. Symptomatic BMs

The following neurological symptoms were included in this analysis: seizure, nausea/vomiting, motor deficit, headache, visual disturbance, and mental health or psychological disturbance (Table 6).
The most frequently documented neurological symptoms were changes in motor function or coordination, with 43.7% (n = 228) of TNBC, 40.3% (n = 302) of luminal A- and B-like, and 41% (n = 435) of HER2-positive patients experiencing these symptoms at diagnosis. About one quarter of the patients (26.0%) complained about headache at presentation of BM. The evaluation of the neurological complaints caused by BM showed a statistically significant difference among the different subtypes concerning the complaints headache, nausea/vomiting, and seizure. The highest rate of seizure could be detected in patients with the luminal A- and B-like subtype (14.8%, n = 111), while the lowest prevalence of seizure was detected in patients with TNBC breast cancer (8.6%, n = 45). The highest rate of headache could be detected in patients with triple-negative breast cancer (28.3%, n = 148); patients with the luminal A- and B-like subtype had the lowest rate of headache (22.1%, n = 166). Nausea/vomiting was most frequently documented by patients with triple-negative breast cancer (25.7%, n = 134); among luminal A and B-like patients, about 19.1% (n = 143) of patients experienced these complaints.

The clinical data for the analysis was derived from the BMBC Registry. Patients with BM of breast cancer registered until April 2019 were considered for this analysis. The BMBC registry was approved by the ethic committee Hessen, Frankfurt am Main (ethic approval number FF42/2013).
The aim of the analysis was to characterize the patient cohort with BM of breast cancer with vs. without documented neurological symptoms. The following neurological symptoms of BM were assessed in the BMBC registry: seizure, nausea/vomiting, motor deficit, headache, visual disturbance, and mental health/psychological disturbance. The following characteristics for the cohort description were assessed: age at first diagnosis of breast cancer and of BM, number and localization of BM, biological subtype, ECOG/Karnofsky performance status at time of BM diagnosis, existence of leptomeningeal metastasis, maximum diameter of BM at first BM diagnosis, extracranial metastases (ECM) at time of BM diagnosis, brain metastases-free interval (time from the first diagnosis of BC to the diagnosis of BM), extracranial metastases-free survival (time from the first diagnosis of BC to ECM in the subgroup of patients with a diagnosis of BM after diagnosis of ECM), and local or contralateral recurrence-free interval (time from the first diagnosis of BC to local or contralateral recurrence) after diagnosis of breast cancer. Furthermore, we performed a comparison of patients with vs. without neurological symptoms regarding the local treatment of BM, year of diagnosis, diagnostic method of BM, and systemic treatment of breast cancer after the diagnosis of BM. Continuous data were summarized using the number of available data, mean, standard deviation (SD), median, and the minimum and maximum for each group. Categorical and ordinal data were summarized using the number and percentage of patients in each group. Differences in the categorical data between patients with symptomatic and asymptomatic BM data were tested by Chi-square or Fisher’s exact test. Differences in the continuous variables between the two patient groups were tested non-parametrically using the Wilcoxon–Mann–Whitney test. For the analysis of the time intervals between the first diagnosis of BC to local or contralateral recurrence, cumulative incidence functions were plotted with death as a competing risk. Differences in the time intervals between symptomatic and asymptomatic patients were tested by Gray’s test.
A multivariate logistic regression was performed for symptomatic vs. asymptomatic BM. The odds ratios with the corresponding 95% confidence intervals were reported.
A further objective was to characterize the cohort of patients with neurological symptoms (seizure, nausea/vomiting, motor deficit, headache, impaired vision, mental health/ psychological disturbance) according to the biological subtype of the initial breast cancer. Biological subtype was defined as HER2-positive, TNBC (ER-, PR-negative, and HER2-negative) and luminal A- and B-like (luminal A- and B-like subtypes were evaluated together (ER and/or PR+, HER2-) because of the missing values of tumor grading causing an issue in the strict distinction of luminal A-like and luminal B-like patients).
Furthermore, we performed an analysis of the OS for the patients with and without neurological symptoms of BM. OS was defined as the time interval from the first diagnosis of BM to death due to any reason. Kapla–Meier curves and the median OS time with the corresponding 95% confidence interval were determined. Differences in the survival curves were tested by the log-rank test. Additionally, an OS analysis in the different breast cancer subtypes (HER2-positive, triple-negative breast cancer, luminal A- and B-like) was performed.
All reported p-values were two-sided, and the significance level was set to 0.05. Confidence intervals symmetrically cover 95%. Adjustment for multiple testing was not planned.
The data was analyzed using SAS® (Statistical Analysis Software) version 9.4 with SAS Enterprise Guide Version 7.1 on Microsoft Windows 10 Enterprise.

Our analyses indicate that asymptomatic patients show a trend for a less severe metastatic disease in the brain and for a better outcome (statistically significant for a cohort of HER2-positive patients) despite a less intense local BM therapy compared to symptomatic patients. Although a lead time bias of the earlier diagnosis cannot be ruled out, this analysis is of potential clinical relevance in the context of potential trials examining the benefit of early detection of BM. 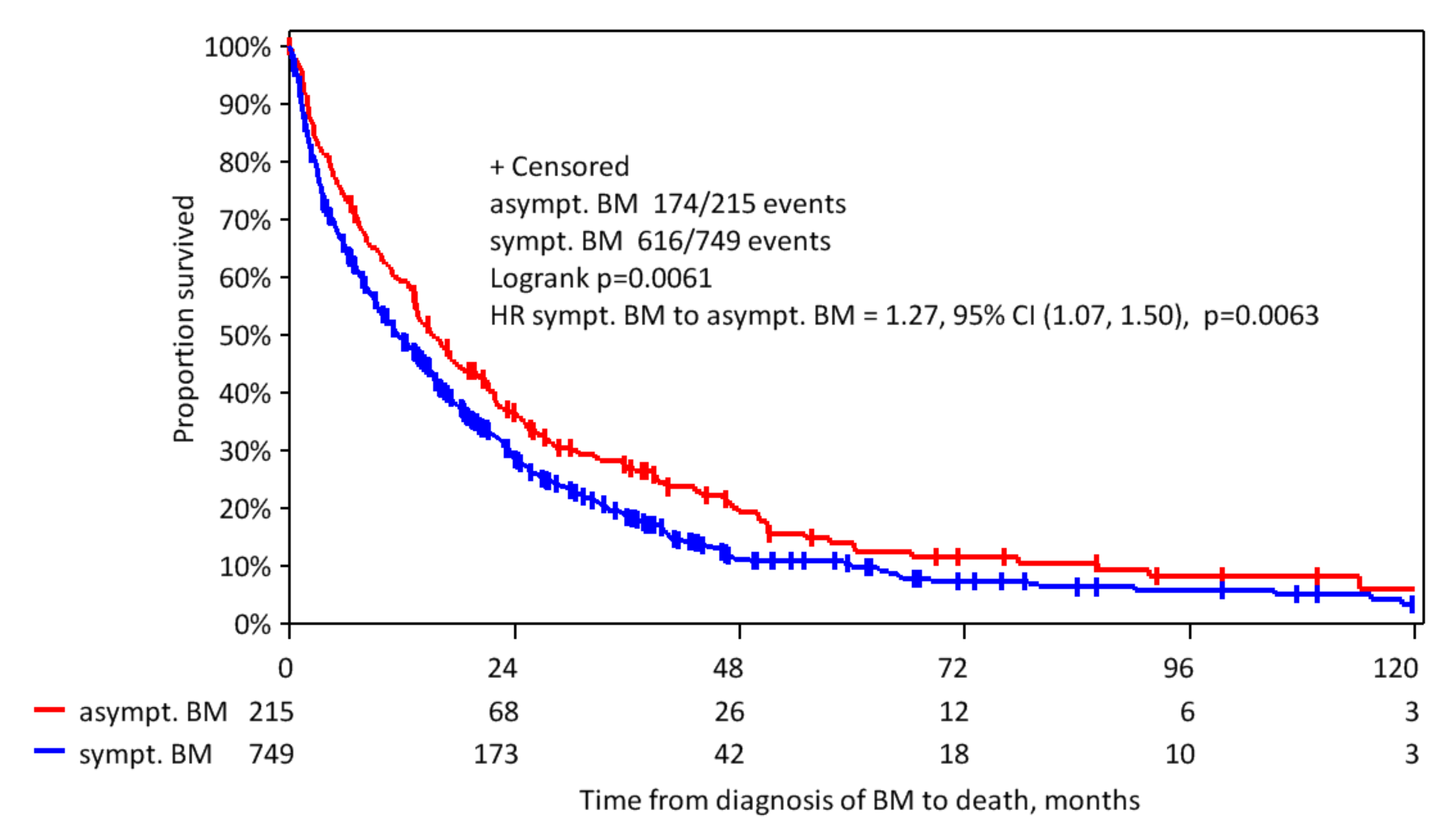