Ionophores: Potential Use as Anticancer Drugs and Chemosensitizers
Next Article in Special Issue

The Cooperative Relationship between STAT5 and Reactive Oxygen Species in Leukemia: Mechanism and Therapeutic Potential

Reactive oxygen species (ROS) are now recognized as important second messengers with roles in many aspects of signaling during leukemogenesis. They serve as critical cell signaling molecules that regulate the activity of various enzymes including tyrosine phosphatases. ROS can induce inactivation of tyrosine phosphatases, which counteract the effects of tyrosine kinases. ROS increase phosphorylation of many proteins including signal transducer and activator of transcription-5 (STAT5) via Janus kinases (JAKs). STAT5 is aberrantly activated through phosphorylation in many types of cancer and this constitutive activation is associated with cell survival, proliferation, and self-renewal. Such leukemic activation of STAT5 is rarely caused by mutation of the STAT5 gene itself but instead by overactive mutant receptors with tyrosine kinase activity as well as JAK, SRC family protein tyrosine kinases (SFKs), and Abelson murine leukemia viral oncogene homolog (ABL) kinases. Interestingly, STAT5 suppresses transcription of several genes encoding antioxidant enzymes while simultaneously enhancing transcription of NADPH oxidase. By doing so, STAT5 activation promotes an overall elevation of ROS level, which acts as a feed-forward loop, especially in high risk Fms-related tyrosine kinase 3 (FLT3) mutant leukemia. Therefore, efforts have been made recently to target ROS in cancer cells. Drugs that are able to either quench ROS production or inversely augment ROS-related signaling pathways both have potential as cancer therapies and may afford some selectivity by activating feedback inhibition of the ROS-STAT5 kinome. This review summarizes the cooperative relationship between ROS and STAT5 and explores the pros and cons of emerging ROS-targeting therapies that are selective for leukemia characterized by persistent STAT5 phosphorylation. View Full-Text
Keywords: signal transducer and activator of transcription; STAT5; reactive oxygen species; leukemogenesis; molecular targeted drug therapy signal transducer and activator of transcription; STAT5; reactive oxygen species; leukemogenesis; molecular targeted drug therapy
►▼ Show Figures 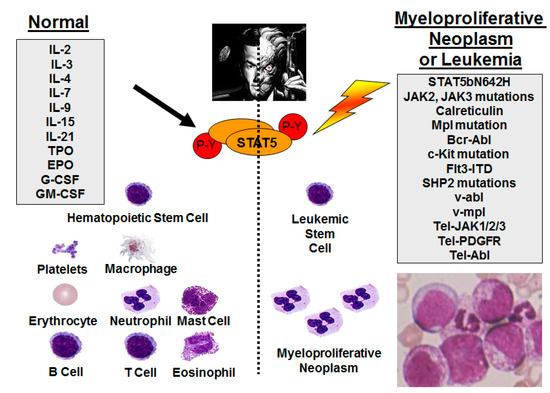