Progress in Research of Flexible MEMS Microelectrodes for Neural Interface

The function of microelectrodes in neural interfaces can be categorized as neural signal recording and neural stimulating. Figure 1 exhibits a representative configuration of an implantable artificial nerve system for paralysis rehabilitation that may bring hope to patients who have suffered a spinal cord injury. It can be seen that, in the whole system, the microelectrodes (recording microelectrodes or stimulating microelectrodes) play a key role in interconnecting biological tissues (brain, nerve, or muscle) with implantable devices. For example, command signals generating from the cerebral cortex are acquired through the recording (or measuring) microelectrodes, which are analyzed and processed by the processing unit. The obtained information is further processed to generate stimulating signals, and then transmitted through the stimulating microelectrodes to the nerve or muscle, for a diverse type of stimulations. For chronic implantation, the microelectrodes act as the tissue–machine interface that make direct contact with biological tissues, and may cause immunological reaction, mechanical damage, and neuronal degradation to tissues, on the one hand. On the other hand, the properties of the microelectrodes can largely effect the quality of the record and stimulation of neural signals, such as signal-to-noise-ratio, stability, resolution, and accuracy. All these issues of neural interfaces mentioned above need to be addressed for practical applications.
With the rapid development of micro fabrication technology, biomedical devices can be manufactured in a considerably tiny and structurally diverse manner, which minimizes the damage during and after implantation in both the short and the long term [1]. Nowadays, some dense electrode arrays and tenuous electrodes are developed to undertake complex and precise electrophysiological research by providing excellent spatial selectivity and low power consumption. The problem is that a smaller size, that certainly lowers the damage to the tissue, would inevitably damage the performance and safety of the electrodes [2], because the decrease in the size of the electrode leads to an increase in impedance and a drop in charge storage capacity (CSC), which, as a result, means poor recording signal quality and a high stimulating current that may damage tissue. Considering this fact, the interface material plays a significant role in improving the electrode performance. Many efforts have been made to develop more ideal electrode–tissue interface materials with properties including: electrical property containing low impedance, high CSC and high charge injection limit stability for long term work or implantation without significant property variation; biocompatibility ensuring direct contact with tissue without inducing severe tissue response, toxicity or even necrosis [3,4,5]. The characteristics of an ideal implantable electrode–tissue interface are shown in Figure 2.

One of the most significant components of the artificial prostheses is the microelectrodes which act as the tissue–machine interface [6,7,8]. To functional well in live muscle and nerve tissue, the biomedical microelectrodes should meet such requirements as: (1) miniature dimension that minimizes the tissue damage and power consumption; (2) excellent performance that ensures effective operation of the prostheses device and; (3) good biocompatibility that guarantees relatively long term implantation without inducing severe immune response. Complying with these disciplines for biomedical electrodes as mentioned above, various kinds of microelectrodes were developed to execute electrical stimulation and electrophysiological signal recording. Among these manifold electrodes, Michigan neural probes and Utah electrodes array have been widely used in central nerve prostheses applications [9,10], while LIFE electrodes are usually applied in peripheral nerve and intramuscular researches [7,11]. However, a key technical challenge of these rigid indwelling electrodes is the mechanical mismatch between the compliant brain tissue and the electrode substrate [12,13,14], which can cause tissue damage and reduce the ability for long term recording. The typical elastic modulus for a rat cerebral cortex is from 0.03 to 1.75 kPa [15], while for silicon is approximately 200 GPa. These problems may cause inflammation, tissue reactivity, scar formation and accessory mechanical damage [16,17,18]. While the use of ultrathin film “flexible” silicon probes can partially alleviate the mechanical mismatch that exists at the tissue–electrode interface, deformation induced from localized stresses readily leads to material rupture [19]. Due to the inherent brittleness and tendency of silicon to fracture, as well as its limited flaw tolerance, overall electrode integrity can be compromised during tissue loading. The mismatch of stiffness between implantable devices and tissues can also be addressed by employing thin film with lower elastic moduli (200 GPa for silicon), for example, polyimide (2.3–8.5 GPa), parylene (~3 GPa), polydimethylsiloxane (PDMS) (0.36–0.87 MPa), and liquid crystal polymer (LCP, ~10.6 GPa). When constructing flexible, insertable microelectrodes, it is desirable to use electrode substrates with lower elastic moduli than silicon which can decrease the micromotion and alleviated tissue encapsulation of the implant. In this review we define electrode substrates with elastic modulus smaller than 10 GPa and thickness smaller than 200 μm as flexible.
It is a significant symptom that should be confronted that only electrical interaction between electrodes and muscle or nerve tissue without nutrition factor delivery would eventually lead to denervation-induced skeletal muscle atrophy [20,21,22]. Considering this fact, microelectrodes integrated with micro channels for fluidic drug delivery were developed in recent years [23,24,25]. As the majority of these studies focused on flexible electrodes made of parylene, polyimide (PI) and polydimethylsiloxane (PDMS) [26,27,28], the flexible microelectrodes integrated with micro channels were intensively reviewed [29,30].

Flexible microelectrodes create challenges for the fabrication of ultra-small metal patterns for better resolution. Thus, the development of microelectrodes with tiny dimension (sub-micrometer) and high-density electrode sites will be the goal for researchers. However the high-density electrode sites make the electrical connection difficult, which in turn will necessitate integration of the electronic circuit with the implantable electrode. However, integrating a commercial electronic circuit into a soft substrate is a challenge, since the substrate is flexible and sometimes stretchable. Delamination of the metal layer of chronically implanted soft electrodes is another critical problem [88]. Therefore, integrating electronic circuits into the flexible microelectrodes and improving elasticity and adhesiveness of the metal layer will be another goal for flexible microelectrodes fabrication. Furthermore, new technologies and materials (such as shape memory materials and biodegradable materials) that can assist insertion of the flexible microelectrodes into brain tissue are quite desirable [38,42]. In addition, transparent flexible MEMS microelectrodes facilitate fluorescence observation of neural tissue [37] and stretchable flexible MEMS microelectrodes for conformal covering on brain tissue will become a new direction in this research area. Also, in terms of electrode modifications for electrode–tissue interface, an ideal tissue engineered interface proposed by Aregueta-Robles et al. that incorporated combined coating approaches of conductive polymers, hydrogels and attachment factors with neural cells, should be able to give considerations to each of the requirements of electrode–tissue interface [89].
In recent years, the applications of optogenetics in neuroscience also attracted much attention from neuroscientists. Although electrical stimulation exhibited remarkable efficacy in controlling and exploring the function of discrete brain regions and providing therapeutic solutions, it was unable to target genetically specified neuron types. The disadvantage of electrical stimulation could be overcome with genetically encoded opsins [90]. As a consequence, flexible MEMS microelectrodes integrated with optical stimulation capability for neural interface will be point of special interest in future research.
Other than that, the integration of flexible MEMS microelectrodes for neural interface and other flexible sensors, such as flow rate sensors, will also be promising in future research. Single element or single function devices will not satisfy the requirements anymore. Devices with multiple sensors, which employ electrochemical impedance methods that are compatible with neural probes [91], will be used as they are more convenient for obtaining information (a single device, at the same time). In brief, flexible MEMS microelectrodes integrated with sensors are in great demand.
In addition, the newly rising nanotechnology and biomedical engineering will open a new gate for the development of flexible MEMS microelectrodes for neural interface. The interdisciplinary research of micro fabrication technology with nanotechnology and biomedical engineering will direct future research [92,93,94,95]. The combination of these cutting-edge subjects will undoubtedly collide to make great scientific strides and greatly influence people’s daily lives and understandings of the world. 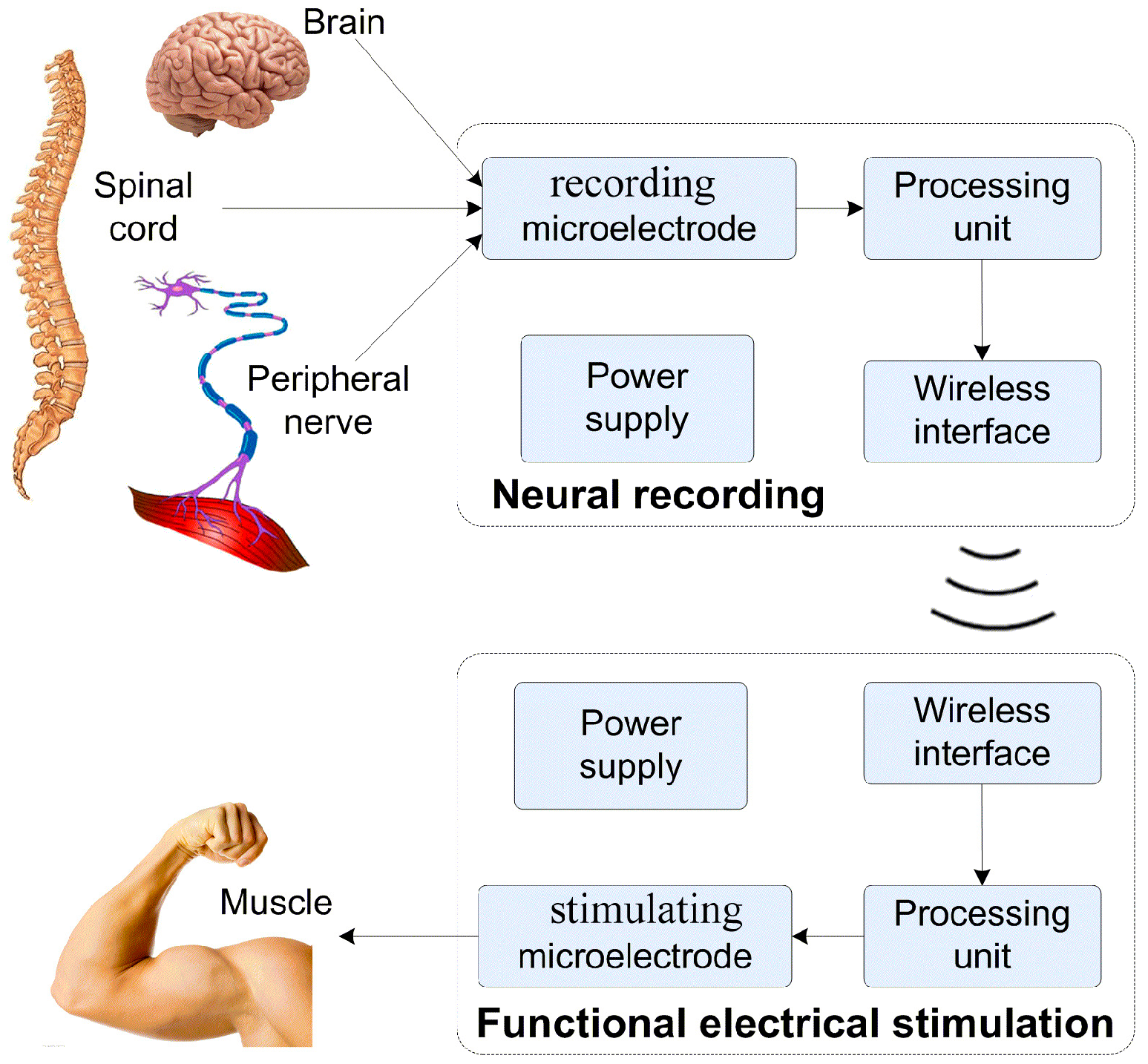 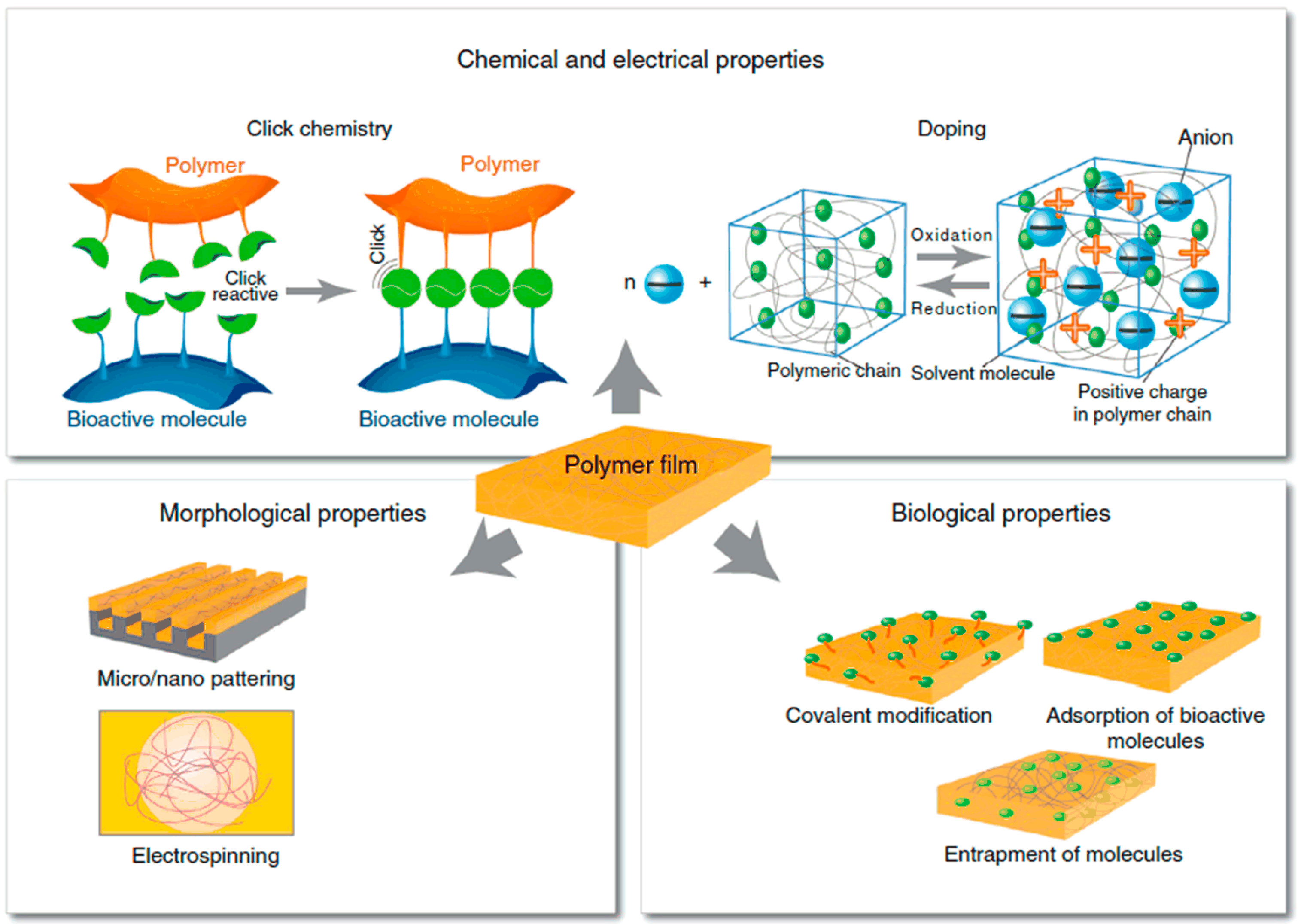 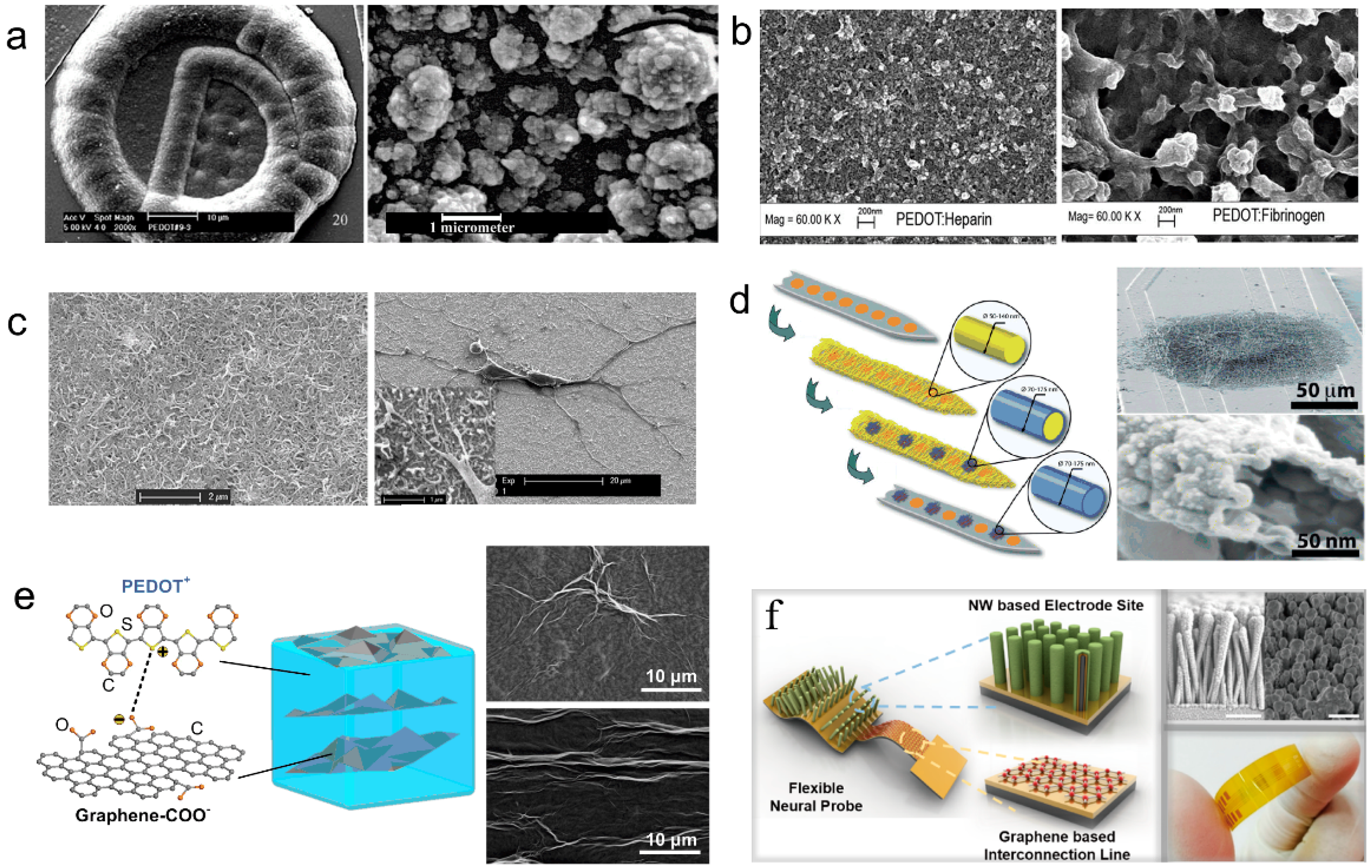