Uremic Toxins and Vascular Dysfunction
Next Article in Special Issue

In Memoriam to Vittorio Ricci, Professor of Pathology at Pavia University
Previous Article in Special Issue

The noble false widow spider Steatoda nobilis originates from the Macaronesian archipelago and has expanded its range globally. Outside of its natural range, it may have a negative impact on native wildlife, and in temperate regions it lives in synanthropic environments where it frequently encounters humans, subsequently leading to envenomations. S. nobilis is the only medically significant spider in Ireland and the UK, and envenomations have resulted in local and systemic neurotoxic symptoms similar to true black widows (genus Latrodectus). S. nobilis is a sister group to Latrodectus which possesses the highly potent neurotoxins called α-latrotoxins that can induce neuromuscular paralysis and is responsible for human fatalities. However, and despite this close relationship, the venom composition of S. nobilis has never been investigated. In this context, a combination of transcriptomic and proteomic cutting-edge approaches has been used to deeply characterise S. nobilis venom. Mining of transcriptome data for the peptides identified by proteomics revealed 240 annotated sequences, of which 118 are related to toxins, 37 as enzymes, 43 as proteins involved in various biological functions, and 42 proteins without any identified function to date. Among the toxins, the most represented in numbers are α-latrotoxins (61), δ-latroinsectotoxins (44) and latrodectins (6), all of which were first characterised from black widow venoms. Transcriptomics alone provided a similar representation to proteomics, thus demonstrating that our approach is highly sensitive and accurate. More precisely, a relative quantification approach revealed that latrodectins are the most concentrated toxin (28%), followed by α-latrotoxins (11%), δ-latroinsectotoxins (11%) and α-latrocrustotoxins (11%). Approximately two-thirds of the venom is composed of Latrodectus-like toxins. Such toxins are highly potent towards the nervous system of vertebrates and likely responsible for the array of symptoms occurring after envenomation by black widows and false widows. Thus, caution should be taken in dismissing S. nobilis as harmless. This work paves the way towards a better understanding of the competitiveness of S. nobilis and its potential medical importance. View Full-Text
Keywords: Steatoda nobilis; envenomation; α-latrotoxin; venom; toxins; neurotoxins; necrosis; mass spectrometry; transcriptomics; venomics Steatoda nobilis; envenomation; α-latrotoxin; venom; toxins; neurotoxins; necrosis; mass spectrometry; transcriptomics; venomics
►▼ Show Figures 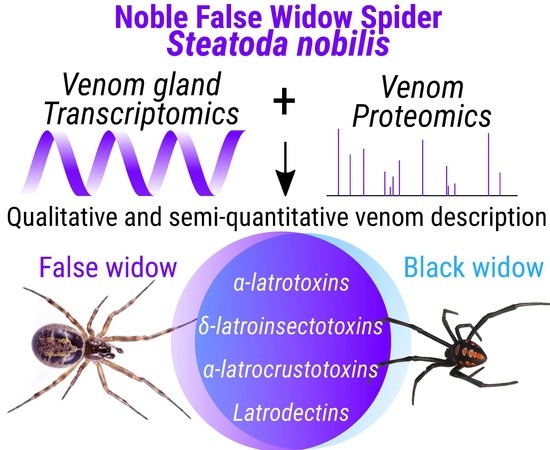