Assessment of Fungal Contamination in Fish Feed from the Lake Victoria Basin, Uganda
Next Article in Special Issue

Meiktila Lake is a shallow reservoir located close to Meiktila city in central Myanmar. Its water is used for irrigation, domestic purposes and drinking water. No detailed study of the presence of cyanobacteria and their potential toxin production has been conducted so far. To ascertain the cyanobacterial composition and presence of cyanobacterial toxins in Meiktila Lake, water samples were collected in March and November 2017 and investigated for physico-chemical and biological parameters. Phytoplankton composition and biomass determination revealed that most of the samples were dominated by the cyanobacterium Raphidiopsis raciborskii. In a polyphasic approach, seven isolated cyanobacterial strains were classified morphologically and phylogenetically as R. raciborskii, and Microcystis spp. and tested for microcystins (MCs), cylindrospermopsins (CYNs), saxitoxins and anatoxins by enzyme-linked immunosorbent assay (ELISA) and liquid chromatography–mass spectrometry (LC–MS). ELISA and LC–MS analyses confirmed CYNs in three of the five Raphidiopsis strains between 1.8 and 9.8 μg mg−1 fresh weight. Both Microcystis strains produced MCs, one strain 52 congeners and the other strain 20 congeners, including 22 previously unreported variants. Due to the presence of CYN- and MC-producing cyanobacteria, harmful effects on humans, domestic and wild animals cannot be excluded in Meiktila Lake. View Full-Text
Keywords: Meiktila Lake; Raphidiopsis; Microcystis; cylindrospermopsin; deoxycylindrospermopsin; microcystin Meiktila Lake; Raphidiopsis; Microcystis; cylindrospermopsin; deoxycylindrospermopsin; microcystin
►▼ Show Figures 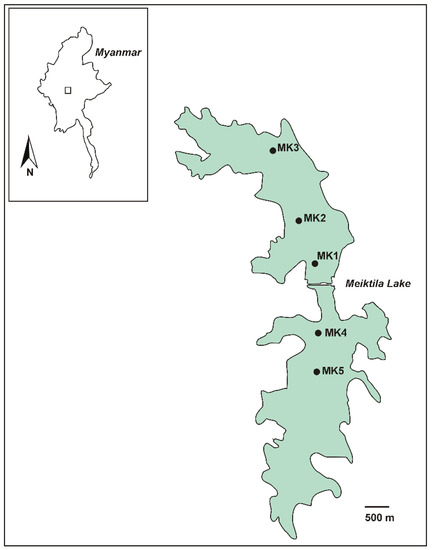