The Individual and Combined Effects of the Cyanotoxins, Anatoxin-a and Microcystin-LR, on the Growth, Toxin Production, and Nitrogen Fixation of Prokaryotic and Eukaryotic Algae

Globally, eutrophication and warming of aquatic ecosystems has increased the frequency and intensity of cyanobacterial blooms and their associated toxins, with the simultaneous detection of multiple cyanotoxins often occurring. Despite the co-occurrence of cyanotoxins such as microcystins and anatoxin-a (ATX) in water bodies, their effects on phytoplankton communities are poorly understood. The individual and combined effects of microcystin-LR (MC-LR) and ATX on the cyanobacteria Microcystis spp., and Anabaena variabilis (a.k.a. Trichormus variabilis), and the chlorophyte, Selenastrum capricornutum were investigated in the present study. Cell density, chlorophyll-a content, and the maximum quantum efficiency of photosystem II (Fv/Fm) of Microcystis cells were generally lowered after exposure to ATX or MC-LR, while the combined treatment with MC-LR and ATX synergistically reduced the chlorophyll-a concentration of Microcystis strain LE-3. Intracellular levels of microcystin in Microcystis LE-3 significantly increased following exposure to MC-LR + ATX. The maximum quantum efficiency of photosystem II of Anabaena strain UTEX B377 declined during exposure to the cyanotoxins. Nitrogen fixation by Anabaena UTEX B377 was significantly inhibited by exposure to ATX, but was unaffected by MC-LR. In contrast, the combination of both cyanotoxins (MC-LR + ATX) caused a synergistic increase in the growth of S. capricornutum. While the toxins caused an increase in the activity of enzymes that scavenge reactive oxygen species in cyanobacteria, enzyme activity was unchanged or decreased in S. capricornutum. Collectively this study demonstrates that MC-LR and ATX can selectively promote and inhibit the growth and performance of green algae and cyanobacteria, respectively, and that the combined effect of these cyanotoxins was often more intense than their individual effects on some strains. This suggests that the release of multiple cyanotoxins in aquatic ecosystems, following the collapse of blooms, may influence the succession of plankton communities. View Full-Text
Keywords: cyanobacteria; allelopathy; chlorophytes; bioactive secondary metabolites cyanobacteria; allelopathy; chlorophytes; bioactive secondary metabolites
►▼ Show Figures 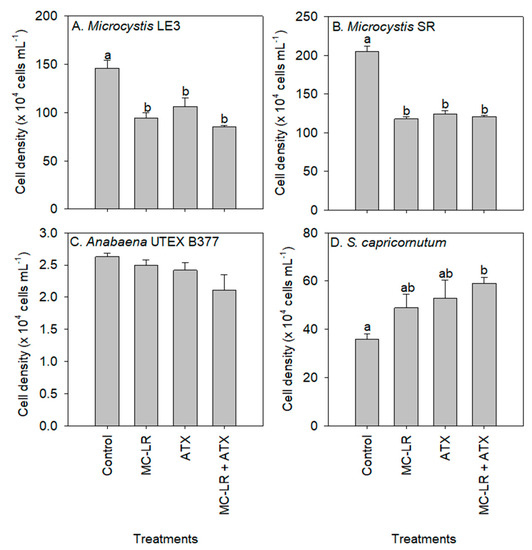