Interaction between Insects, Toxins, and Bacteria: Have We Been Wrong So Far?

Toxins are a major virulence factor produced by many pathogenic bacteria. In vertebrates, the response of hosts to the bacteria is inseparable from the response to the toxins, allowing a comprehensive understanding of this tripartite host-pathogen-toxin interaction. However, in invertebrates, this interaction has been investigated by two complementary but historically distinct fields of research: toxinology and immunology. In this article, I highlight how such dichotomy between these two fields led to a biased, or even erroneous view of the ecology and evolution of the interaction between insects, toxins, and bacteria. I focus on the reason behind such a dichotomy, on how to bridge the fields together, and on confounding effects that could bias the outcome of the experiments. Finally, I raise four questions at the border of the two fields on the cross-effects between toxins, bacteria, and spores that have been largely underexplored to promote a more comprehensive view of this interaction. View Full-Text
Keywords: invertebrate immunity; host-pathogens interaction; toxins; Bacillus thuringiensis; resistance invertebrate immunity; host-pathogens interaction; toxins; Bacillus thuringiensis; resistance
►▼ Show Figures 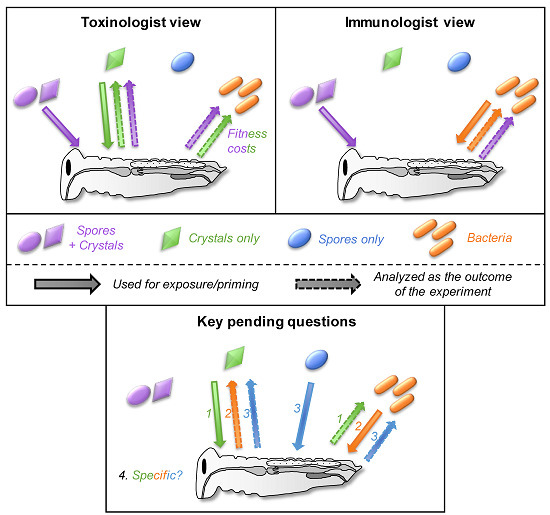