Interaction between Insects, Toxins, and Bacteria: Have We Been Wrong So Far?
Previous Article in Journal

It is hypothesized that the uremic toxin indoxyl sulfate (IS) plays a role in the pathogenesis of renal anemia. To further explore that hypothesis, we examined the effects of IS on reactive oxygen species (ROS) production, levels of reduced glutathione (GSH), and erythrocyte death (eryptosis) in red blood cells (RBC) from healthy controls (CON-RBC) and hemodialyzed patients (HD-RBC), respectively. RBC were incubated either in either TRIS-Glc-BSA buffer or IS at concentrations of 0.01, 0.09, and 0.17 mM, respectively. We measured ROS generation (expressed as % of DCFH-DA positive RBC), eryptosis (expressed as % of annexin-V positive RBC), and GSH levels after 6, 12, and 24 h. When incubated in buffer, ROS production was approximately seven-fold higher at all time points HD-RBC when compared to CON-RBC. Incubation with IS increased ROS production in CON-RBS dose-dependently up to 10-fold. Eryptosis in buffer-incubated HD-RBC was up to seven-fold higher as compared to COB-RBC. Incubation of CON-RBC with IS increased the eryptosis rate dose-dependently up to 6-fold. Pretreatment of CON-RBC with the organic anion transporter 2 (OAT2) specific inhibitor ketoprofen or with NADPH oxidase inhibitor diphenyleneiodonium-Cl blunted the IS effect on both ROS production and eryptosis induction. While GSH levels in HD-RBC were reduced when compared to CON-RBC, they were not affected by IS incubation. In summary, IS increases ROS generation and eryptosis in CON-RBC by an activity dependent of the IS influx through OAT2, and NADPH oxidase activity-dependent, and a GSH-independent mechanism. These findings lend support to a putative role of IS in the pathogenesis of renal anemia. View Full-Text
Keywords: chronic kidney disease; indoxyl sulfate; eryptosis; oxidative stress chronic kidney disease; indoxyl sulfate; eryptosis; oxidative stress
►▼ Show Figures 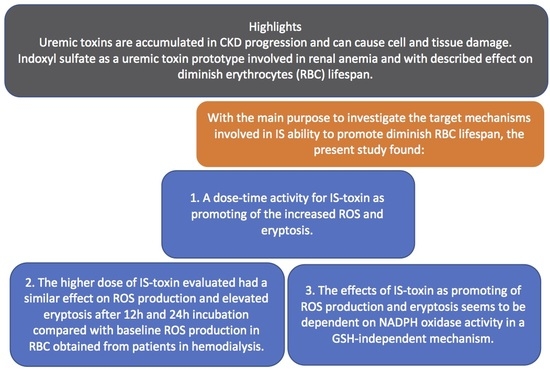