Growth and Toxin Production of Gambierdiscus spp. Can Be Regulated by Quorum-Sensing Bacteria

The human health risks posed by exposure to cyanobacterial toxins such as microcystin (MC) through water and fish consumption remain poorly described. During the last two decades, coastal regions of Lake Victoria such as Nyanza Gulf (Kisumu Bay) have shown severe signs of eutrophication with blooms formed by Microcystis producing MC. In this study, the spatial variability in MC concentration in Kisumu Bay was investigated which was mostly caused by Microcystis buoyancy and wind drifting. Small fish (<6 cm) mainly composed of Rastrineobola argentea were examined for MC content by means of biological methods such as ELISA and protein phosphatase inhibition assay (PPIA) and partly by chemical-analytical methods such as LC-MS/MS. Overall, the MC content in small fish was related to the MC content observed in the seston. When comparing the MC content in the seston in relation to dry weight with the MC content in small fish the latter was found three orders of magnitude decreased. On average, the ELISA-determined MC contents exceeded the PPIA-determined MC contents by a factor of 8.2 ± 0.5 (SE) while the MC contents as determined by LC-MS/MS were close to the detection limit. Using PPIA, the MC content varied from 25–109 (mean 62 ± 7) ng/g fish dry weight in Kisumu Bay vs. 14 ± 0.8 ng MC/g in the more open water of L. Victoria at Rusinga channel. Drying the fish under the sun showed little effect on MC content, although increased humidity might indirectly favor photocatalyzed MC degradation. View Full-Text
Keywords: eutrophication; Microcystis; spatial variability; cyanotoxins; ELISA; PPIA; food chain; Rastrineobola argentea eutrophication; Microcystis; spatial variability; cyanotoxins; ELISA; PPIA; food chain; Rastrineobola argentea
►▼ Show Figures 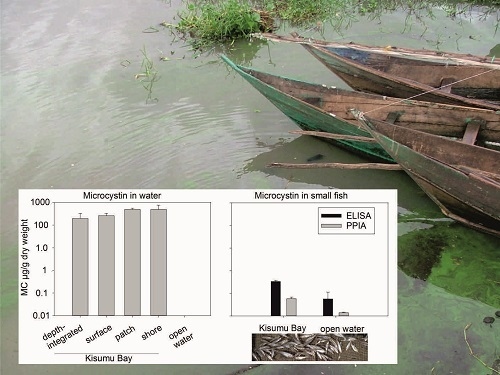