Targeted fortification programs for infants and young children are an effective strategy to prevent micronutrient deficiencies in developing countries, but the role of large-scale fortification of staple foods and condiments is less clear. Dietary modeling in children aged 6–60 months was undertaken, based on food consumption patterns described in the 2009 national food consumption survey, using a 24-h recall method. Consumption data showed that the median intake of a child for iron, vitamin A and zinc, as a proportion of the Vietnamese Recommended Dietary Allowance (VRDA), is respectively 16%–48%, 14%–49% and 36%–46%, (depending on the age group). Potential fortification vehicles, such as rice, fish/soy sauces and vegetable oil are consumed daily in significant amounts (median: 170 g/capita/day, 4 g/capita/day and 6 g/capita/day, respectively) by over 40% of the children. Vegetable oil fortification could contribute to an additional vitamin A intake of 21%–24% of VRDA recommended nutrient intake, while fortified rice could support the intakes of all the other micronutrients (14%–61% for iron, 4%–11% for zinc and 33%–49% of folate requirements). Other food vehicles, such as wheat flour, which is consumed by 16% of children, could also contribute to efforts to increase micronutrient intakes, although little impact on the prevalence of micronutrient deficiencies can be expected if used alone. The modeling suggests that fortification of vegetable oil, rice and sauces would be an effective strategy to address micronutrient gaps and deficiencies in young children. View Full-Text
Keywords: fortification; strategy; infant; young children; Vietnam; recommended dietary allowance fortification; strategy; infant; young children; Vietnam; recommended dietary allowance
►▼ Show Figures 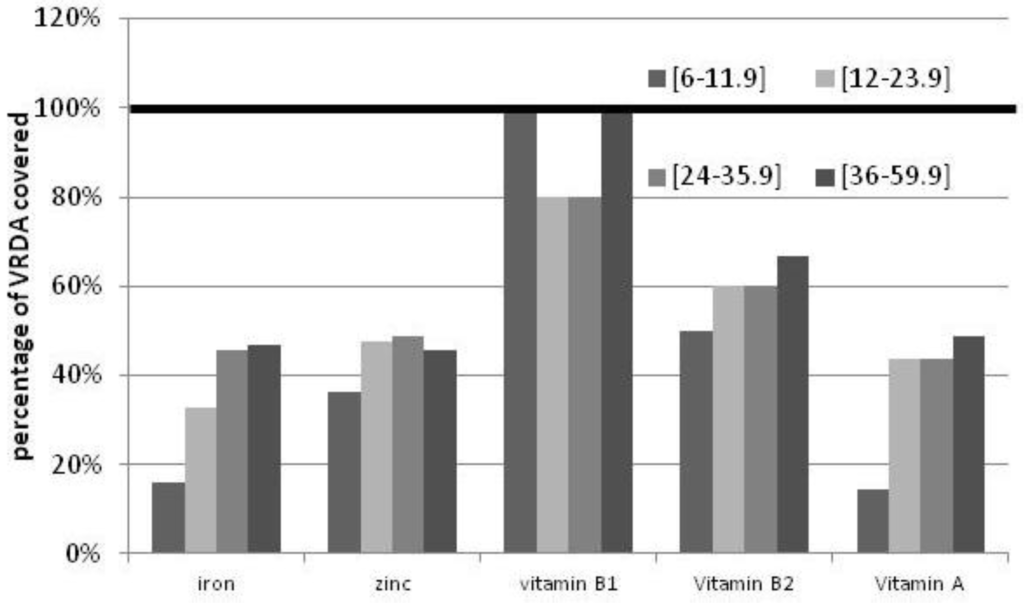