In obesity, the dysfunctional adipose tissue (AT) releases increased levels of proinflammatory adipokines such as TNFα, IL-6, and IL-1β and free fatty acids (FFAs), characterizing a chronic, low-grade inflammation. Whilst FFAs and proinflammatory adipokines are known to elicit an inflammatory response within AT, their relative influence upon preadipocytes, the precursors of mature adipocytes, is yet to be determined. Our results demonstrated that the conditioned medium (CM) derived from obese AT was rich in FFAs, which guided us to evaluate the role of TLR4 in the induction of inflammation in preadipocytes. We observed that CM derived from obese AT increased reactive oxygen species (ROS) levels and NF-ĸB nuclear translocation together with IL-6, TNFα, and IL-1β in 3T3-L1 cells in a TLR4-dependent manner. Furthermore, TLR4 signaling was involved in the increased expression of C/EBPα together with the release of leptin, adiponectin, and proinflammatory mediators, in response to the CM derived from obese AT. Our results suggest that obese AT milieu secretes lipokines, which act in a combined paracrine/autocrine manner, inducing inflammation in preadipocytes via TLR4 and ROS, thus creating a paracrine loop that facilitates the differentiation of adipocytes with a proinflammatory profile. View Full-Text
Keywords: adipose tissue; preadipocyte; TLR4; inflammation; free fatty acid; obesity adipose tissue; preadipocyte; TLR4; inflammation; free fatty acid; obesity
►▼ Show Figures 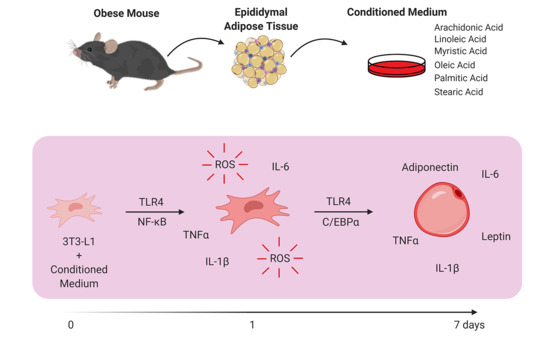