Dysbiosis is commonly detected in patients with inflammatory bowel disease (IBD), supporting the concept that a dysregulated immune reaction to bacterial antigens has a pathogenic role in the development of intestinal inflammation. In the present study, we have investigated the beneficial effects of a novel probiotic formulation assembled by combining four probiotics (Streptococcus thermophilus, Lactobacillus casei, Bifidobacterium breve, Bifidobacterium animalis subsp. Lactis) with Bacillus subtilis, a Gram-positive bacterium, with extensive bio-applications. Mice rendered colitic by administration of TNBS or DSS were administered with Bacillus subtilis alone, Vivomixx® or the novel Five strains formulation. Vivomixx® attenuated the severity of inflammation and reduced the development of signs and symptoms of colitis in both models. Adding Bacillus subtilis to Vivomixx® improved the beneficial effects of the bacterial therapy. The novel Five strains formulation was as effective as Vivomixx® in reducing the development of signs and symptoms of colitis and reduced the expression of pro-inflammatory mediators including Il-6 and Tnf-α while increased the expression of Il-10 mRNA and the number of Treg. In summary, we have shown that a novel Five strains probiotics formulation exerts beneficial effects on two chemical models of colitis, establishing Bacillus subtilis as a probiotic in rodent models of inflammation. View Full-Text
Keywords: probiotics; inflammatory bowel disease; animal studies; cytokines and inflammation; treg probiotics; inflammatory bowel disease; animal studies; cytokines and inflammation; treg
►▼ Show Figures 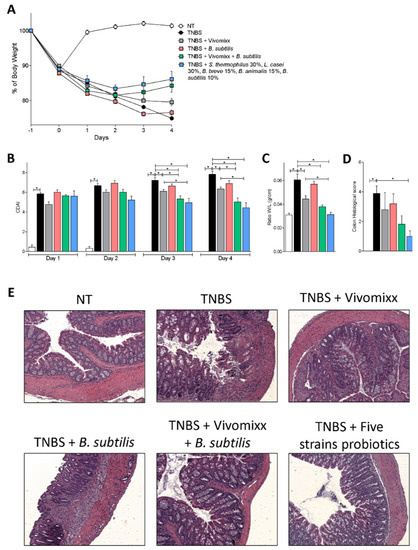