The Role of Vitamin D in Respiratory Allergies Prevention. Why the Effect Is so Difficult to Disentangle?

Novel Therapeutic Approach for the Management of Mood Disorders: In Vivo and In Vitro Effect of a Combination of L-Theanine, Melissa officinalis L. and Magnolia officinalis Rehder & E.H. Wilson

Mood disorders represent one of the most prevalent and costly psychiatric diseases worldwide. The current therapies are generally characterized by several well-known side effects which limit their prolonged use. The use of herbal medicine for the management of several psychiatric conditions is becoming more established, as it is considered a safer support to conventional pharmacotherapy. The aim of this study was to investigate the possible anxiolytic and antidepressant activity of a fixed combination of L-theanine, Magnolia officinalis, and Melissa officinalis (TMM) in an attempt to evaluate how the multiple modulations of different physiological systems may contribute to reducing mood disorders. TMM showed an anxiolytic-like and antidepressant-like activity in vivo, which was related to a neuroprotective effect in an in vitro model of excitotoxicity. The effect of TMM was not altered by the presence of flumazenil, thus suggesting a non-benzodiazepine-like mechanism of action. On the contrary, a significant reduction in the effect was observed in animals and neuronal cells co-treated with AM251, a cannabinoid receptor type 1 (CB1) antagonist, suggesting that the endocannabinoid system may be involved in the TMM mechanism of action. In conclusion, TMM may represent a useful and safe candidate for the management of mood disorders with an innovative mechanism of action, particularly as an adjuvant to conventional therapies. View Full-Text
Keywords: mood disorders; L-theanine; excitotoxicity; neuroprotection; endocannabinoid system; CB1; flumazenil; anxiety mood disorders; L-theanine; excitotoxicity; neuroprotection; endocannabinoid system; CB1; flumazenil; anxiety
►▼ Show Figures 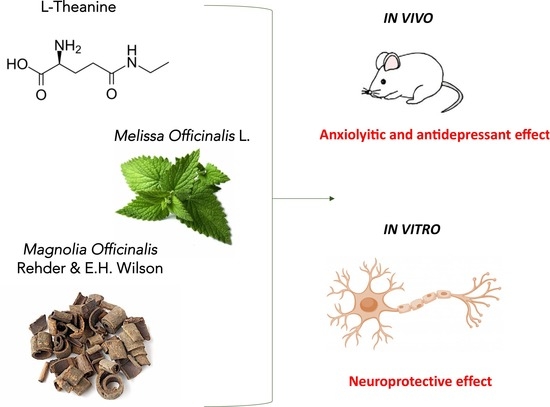