Destigmatizing Carbohydrate with Food Labeling: The Use of Non-Mandatory Labelling to Highlight Quality Carbohydrate Foods
Previous Article in Special Issue

The Firmicutes/Bacteroidetes Ratio: A Relevant Marker of Gut Dysbiosis in Obese Patients?

The composition of human breast milk is affected by several factors, including genetics, geographic location and maternal nutrition. This study investigated the human milk oligosaccharides (HMOs) of breastfeeding mothers living in Dubai and their relations with the milk microbiota. A total of 30 breast milk samples were collected from healthy Emirati and UAE-expatriates at Latifa Hospital. HMO profiling was performed using UHPLC-MS. Microbiota profiles were determined by sequencing amplicons of the V3-V4 region of the 16S rRNA gene. HMO concentrations were significantly higher in Emirati, and dropped with the lactation period in both groups of mothers. The Le (a−b+)-secretor (Le+Se+) type was the most abundant in Dubai mothers (60%), followed by the Le(a−b−)-secretor (Le−Se+) type (23%). Bifidobacterium and Lactobacillus were considerably lower in Dubai-based mothers, while Pseudomonas and Delftia (Hydrogenophaga) were detected at a higher abundance compared to mothers from other countries. Atopobium was correlated with sialyl-lacto-N-tetraose c, Leptotrichia and Veillonella were correlated with 6’-sialyl-lactose, and Porphyromonas was correlated with lacto-N-hexaose. The study highlights the HMO profiles of breastfeeding mothers in Dubai and reveals few correlations with milk microbial composition. Targeted genomic analyses may help in determining whether these differences are due to genetic variations or to sociocultural and environmental factors. View Full-Text
Keywords: human milk oligosaccharides; microbiota; breastfeeding mothers; V3-V4 16S rRNA gene; next generation sequencing human milk oligosaccharides; microbiota; breastfeeding mothers; V3-V4 16S rRNA gene; next generation sequencing
►▼ Show Figures 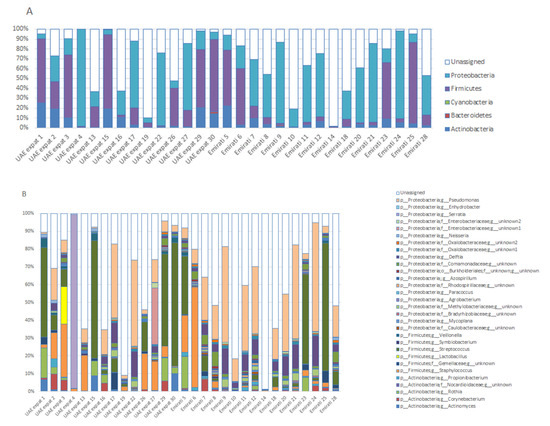