Associations between Changes in Health Behaviours and Body Weight during the COVID-19 Quarantine in Lithuania: The Lithuanian COVIDiet Study
Previous Article in Special Issue

The Relationship between Choline Bioavailability from Diet, Intestinal Microbiota Composition, and Its Modulation of Human Diseases

Metabolic syndrome (MetS) is characterized by low-grade inflammation and insulin resistance, which increase the risk of heart disease. Eggs have numerous nutrients including choline, carotenoids, and fat-soluble vitamins that may protect against these conditions. Egg phosphatidylcholine (PC) is a major contributor of dietary choline in the American diet. However, uncertainty remains regarding eggs due to their high concentration of cholesterol. In this study, we evaluated the effect of two sources of choline, whole eggs (a source of PC) and a choline supplement (choline bitartrate, CB), on plasma lipids, glucose, insulin resistance, and inflammatory biomarkers. We recruited 23 subjects with MetS to participate in this randomized cross-over intervention. After a 2-week washout, with no choline intake, participants were randomly allocated to consume three eggs/day or CB (~400 mg choline/d for both) for 4 weeks. After a 3-week washout period, they were allocated to the alternate treatment. Dietary records indicated higher concentrations of vitamin E and selenium during the egg period (p < 0.01). Interestingly, there were no changes in plasma total, low density lipoprotein (LDL)- or high density lipoprotein (HDL)-cholesterol, triglycerides, or glucose, compared either to baseline or between treatments. In contrast, interleukin-6 was reduced, with both sources of choline compared to baseline, while eggs also had an effect on lowering C-reactive protein, insulin, and insulin resistance compared to baseline. This study demonstrates that in a MetS population, intake of three eggs per day does not increase plasma LDL cholesterol, and has additional benefits on biomarkers of disease compared to a choline supplement, possibly due to the presence of other antioxidants in eggs. View Full-Text
Keywords: eggs; choline supplement; plasma cholesterol; plasma choline; Vitamin E; selenium eggs; choline supplement; plasma cholesterol; plasma choline; Vitamin E; selenium
►▼ Show Figures 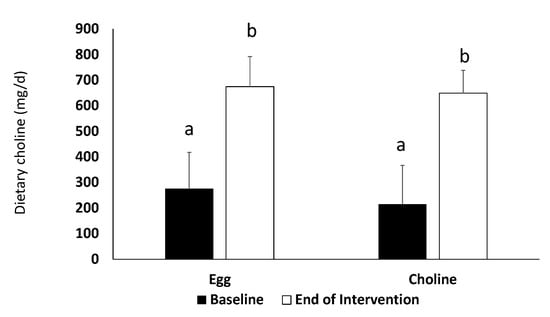