Effects of Macronutrients on the In Vitro Production of ClpB, a Bacterial Mimetic Protein of α-MSH and Its Possible Role in Satiety Signaling

What Is Known About the Nutritional Intake of Women during Pregnancy Following Bariatric Surgery? A Scoping Review

Optimising the diet and weight of women prior to and during pregnancy is of paramount importance to both maternal and offspring health. In women who become pregnant after bariatric surgery, evidence suggests a better overall obstetric outcome in comparison to women with severe obesity managed conservatively. Historically, most studies in this population group have monitored supplement adherence or serum concentrations of micronutrients, rather than dietary intake. The aim of this study was to synthesise current knowledge of the dietary intake of women during pregnancy following bariatric surgery. A systematic search of search engines was conducted using the following databases: MEDLINE, Embase, CINAHL, Cochrane database, Scopus, Trip, NHS Evidence, UK Clinical Trials, ClinicalTrials.gov, Prospero, Epistemonikos and Open Grey. Titles and abstracts were screened independently by two reviewers against predefined inclusion and exclusion criteria. After removal of duplicates, 1594 titles were identified, of which 1586 were initially excluded. Following full-text review, four articles were included. In total, across all four studies, data from only 202 bariatric surgery participants were included, the majority of whom had had one type of surgery. Just one study included a control group. Reporting of nutritional outcomes was heterogenous, with none of the studies including complete macro and micronutrient intake results in their articles. An insufficient intake of protein was noted as a concern in two studies and associated with poor fetal growth in one study. Overall, this review has identified a paucity of data about the dietary intake of women during pregnancy after bariatric surgery. View Full-Text
Keywords: metabolic surgery; bariatric surgery; pregnancy; maternal dietary intake; scoping review metabolic surgery; bariatric surgery; pregnancy; maternal dietary intake; scoping review
►▼ Show Figures 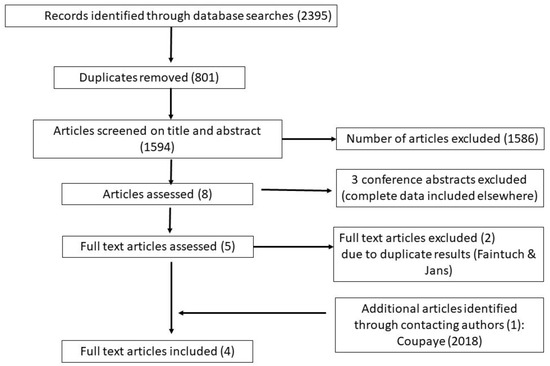