Food and Nutrient Intake during Pregnancy in Relation to Maternal Characteristics: Results from the NICE Birth Cohort in Northern Sweden
Next Article in Special Issue

Impact of Arginine Nutrition and Metabolism during Pregnancy on Offspring Outcomes

Nitric oxide (NO) is a well-known vasodilator produced by the vascular endothelium via the enzyme endothelial nitric oxide synthase (eNOS). The inadequate production of NO has been linked to elevated blood pressure (BP) in both human and animal studies, and might be due to substrate inaccessibility. This review aimed to investigate whether oral administration of the amino acids l-arginine (Arg) and l-citrulline (Cit), which are potential substrates for eNOS, could effectively reduce BP by increasing NO production. Both Arg and Cit are effective at increasing plasma Arg. Cit is approximately twice as potent, which is most likely due to a lower first-pass metabolism. The current data suggest that oral Arg supplementation can lower BP by 5.39/2.66 mmHg, which is an effect that is comparable with diet changes and exercise implementation. The antihypertensive properties of Cit are more questionable, but are likely in the range of 4.1/2.08 to 7.54/3.77 mmHg. The exact mechanism by which Cit and Arg exert their effect is not fully understood, as normal plasma Arg concentration greatly exceeds the Michaelis constant (Km) of eNOS. Thus, elevated plasma Arg concentrations would not be expected to increase endogenous NO production significantly, but have nonetheless been observed in other studies. This phenomenon is known as the “l-arginine paradox”. View Full-Text
Keywords: amino acids; nutrition; nitric oxide; eNOS; blood pressure; hypertension amino acids; nutrition; nitric oxide; eNOS; blood pressure; hypertension
►▼ Show Figures 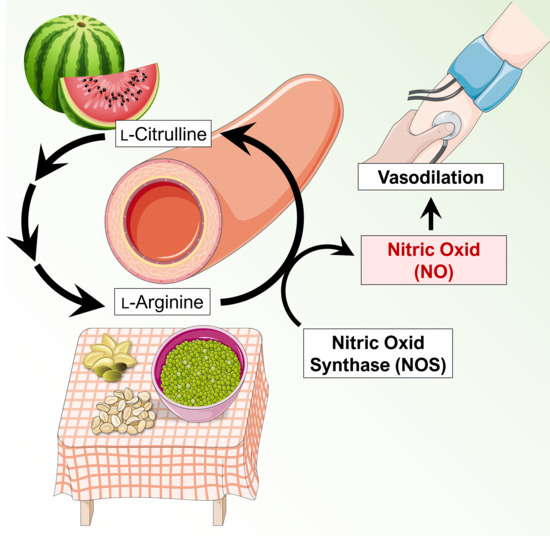