Fried cottage cheese is a dairy product, popular in some parts of Poland. Proteomic analysis of a culture of the mold Galactomyces geotrichum 38 isolated from fried cottage cheese was performed using UHPLC/MS. From the proteins identified, we selected those involved in the biosynthesis of bioactive compounds and those useful in industry. In the G. geotrichum 38 culture, the production quantities of vitamin B2 (224 μg/L), ergosterol (54.63 mg/kg), and trehalose (0.91 g/L) were determined by HPLC. The identified proteins were also used to prepare a hypothetical fatty acid biosynthesis pathway, and the percentage of individual sphingolipids in the culture was determined. Sphingolipids are also bioactive compounds. During culturing of G. geotrichum 38, the percentage of three sphingolipids increased. The last step of the research was to prepare a model of fried cottage cheese. The mold G. geotrichum 38, used in the process of ripening fried cottage cheese, synthesized vitamin B2 and erogsterol, which influenced the nutritional value of the product. View Full-Text
Keywords: G. geotrichum; ergosterol; vitamin B2; trehalose; protein analysis G. geotrichum; ergosterol; vitamin B2; trehalose; protein analysis
►▼ Show Figures 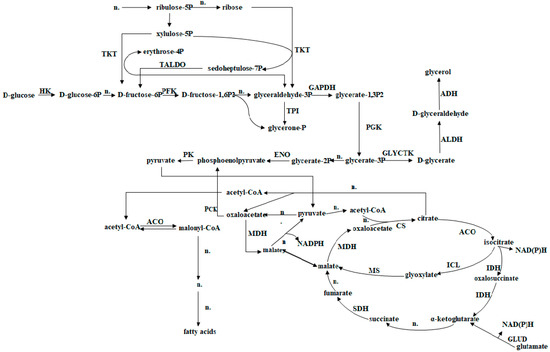