Development of Criteria for Incorporating Occasionally Consumed Foods into a National Dietary Guideline: A Practical Approach Adapted to the Spanish Population
Previous Article in Journal

Role of Nutrition and Adherence to the Mediterranean Diet in the Multidisciplinary Approach of Hidradenitis Suppurativa: Evaluation of Nutritional Status and Its Association with Severity of Disease

Hidradenitis suppurativa (HS) is a chronic, inflammatory and debilitating skin disorder. The exacerbating factors of HS include nutrition and adiposity. We aimed to investigate the relationships between body composition and the adherence to the Mediterranean diet (MD) with the severity of HS in a sample of naive-treatment patients with HS. In this case–controlled, cross-sectional study, we enrolled 41 HS patients and 41 control subjects. Body composition was evaluated by a bioelectrical impedance analysis (BIA) phase-sensitive system. PREvención con DIeta MEDiterránea (PREDIMED) and the 7-day food records were used to evaluate the degree of adherence to the MD and dietary pattern, respectively. The clinical severity was assessed by using the Sartorius HS score. HS patients had a worse body composition, in particular lower phase angle (PhA) (p < 0.001), and a lower adherence to the MD than controls, in spite of no differences in energy intake between the two groups. The receiver operator characteristic (ROC) analysis showing a value of PhA of ≤ 5.7 and a PREDIMED score of ≤ 5.0 identified HS patients with the highest clinical severity of the disease. After adjusting for sex, age, body mass index (BMI), and total energy intake, the HS Sartorius score maintained negative correlations with PhA (p < 0.001), PREDIMED score, and n-3 polyunsaturated fatty acids (p = 0.005). The results of the multivariate analysis showed PhA and PREDIMED score were the major determinants of HS Sartorius score, explaining 82.0% and 30.4% of its variability, respectively (p < 0.001). Novel associations were demonstrated between PhA and the degree of adherence to the MD with the HS severity. PhA and PREDIMED score might represent possible markers of severity of HS in a clinical setting. View Full-Text
Keywords: nutrition; body composition; Mediterranean diet; Hidradenitis Suppurativa; phase angle; 7-day food records nutrition; body composition; Mediterranean diet; Hidradenitis Suppurativa; phase angle; 7-day food records
►▼ Show Figures 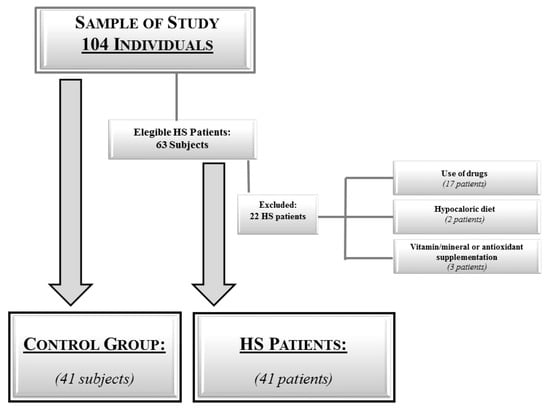