Does the Intra-Arctic Modification of Long-Range Transported Aerosol Affect the Local Radiative Budget? (A Case Study)
Previous Article in Journal

The climate in Svalbard has been warming dramatically compared with the global average for the last few decades. Seasonal snow cover, which is sensitive to temperature and precipitation changes, is therefore expected to undergo both spatial and temporal changes in response to the changing climate in Svalbard. This will in turn have implications for timing of terrestrial productivity, which is closely linked to the disappearance of seasonal snow. We have produced a 20-year snow cover fraction time series for the Svalbard archipelago, derived from MODIS (Moderate Resolution Imaging Spectroradiometer) Terra data to map and identify changes in the timing of the first snow-free day (FSFD) for the period 2000–2019. Moreover, we investigate the influence of sea ice concentration (SIC) variations on FSFD and how FSFD is related to the start of the phenological growing season in Svalbard. Our results revealed clear patterns of earlier FSFD in the southern and central parts of the archipelago, while the northernmost parts exhibit little change or trend toward later FSFD, resulting in weaker trends in summer and winter duration. We found that FSFD preceded the onset of the phenological growing season with an average difference of 12.4 days for the entire archipelago, but with large regional variations that are indicative of temperature dependence. Lastly, we found a significant correlation between variations of time-integrated SIC and variations in FSFD, which maximizes when correlating SIC northeast of Svalbard with FSFD averaged over Nordaustlandet. Prolonged sea ice cover in the spring was correlated with late snow disappearance, while lower-than-average sea ice cover correlated with early snow disappearance, indicating that proximity to sea ice plays an important role in regulating the timing of snow disappearance on land through influencing the regional air temperature and therefore rate of spring snowmelt. View Full-Text
Keywords: snow cover; remote sensing; sea ice variability; vegetation growth; arctic climate change snow cover; remote sensing; sea ice variability; vegetation growth; arctic climate change
►▼ Show Figures 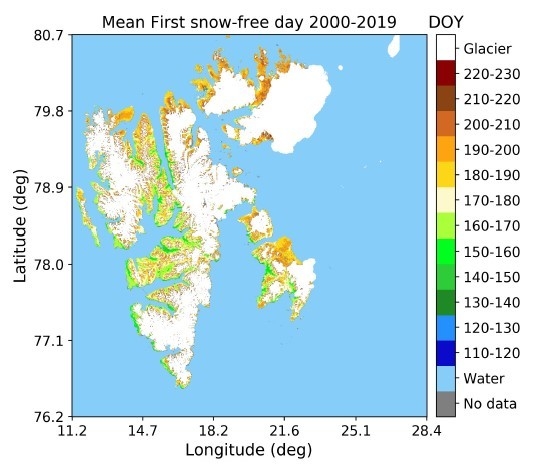