Spatiotemporal Patterns and Morphological Characteristics of Ulva prolifera Distribution in the Yellow Sea, China in 2016–2018

The world’s largest macroalgal blooms, Ulva prolifera, have appeared in the Yellow Sea every summer on different scales since 2007, causing great harm to the regional marine economy. In this study, the Normalized Difference of Vegetation Index (NDVI) index was used to extract the green tide of Ulva prolifera from MODIS images in the Yellow Sea in 2016–2018, to investigate its spatiotemporal patterns and to calculate its occurrence probability. Using the standard deviational ellipse (SDE), the morphological characteristics of the green tide, including directionality and regularity, were analyzed. The results showed that the largest distribution and coverage areas occurred in 2016, with 57,384 km2 and 2906 km2, respectively and that the total affected region during three years was 163,162 km2. The green tide drifted northward and died out near Qingdao, Shandong Province, which was found to be a high-risk region. The coast of Jiangsu Province was believed to be the source of Ulva prolifera, but it was probably not the only one. The regularity of the boundary shape of the distribution showed a change that was opposite to the variation of scale. Several sharp increases were found in the parameters of the SDE in all three years. In conclusion, the overall situation of Ulva prolifera was still severe in recent years, and the sea area near Qingdao became the worst hit area of the green tide event. It was also shown that the sea surface wind played an important part in its migration and morphological changes. View Full-Text
Keywords: Ulva prolifera; green tide; MODIS; spatiotemporal patterns; morphological characteristics Ulva prolifera; green tide; MODIS; spatiotemporal patterns; morphological characteristics
►▼ Show Figures 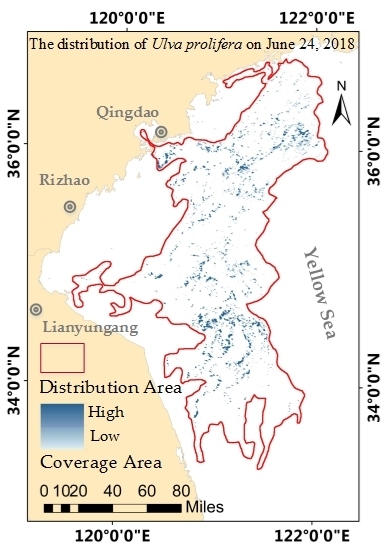