Spatiotemporal Patterns and Morphological Characteristics of Ulva prolifera Distribution in the Yellow Sea, China in 2016–2018
Next Article in Special Issue

Phewa Lake is an environmental and socio-economic asset to Nepal and the city of Pokhara. However, the lake area has decreased in recent decades due to sediment influx. The rate of this decline and the areal evolution of Phewa Lake due to artificial damming and sedimentation is disputed in the literature due to the lack of a historical time series. In this paper, we present an analysis of the lake’s evolution from 1926 to 2018 and model the 50-year trajectory of shrinkage. The area of Phewa Lake expanded from 2.44 ± 1.02 km2 in 1926 to a maximum of 4.61 ± 0.07 km2 in 1961. However, the lake area change was poorly constrained prior to a 1957–1958 map. The contemporary lake area was 4.02 ± 0.07 km2 in April 2018, and expands seasonally by ~0.18 km2 due to the summer monsoon. We found no evidence to support a lake area of 10 km2 in 1956–1957, despite frequent reporting of this value in the literature. Based on the rate of areal decline and sediment influx, we estimate the lake will lose 80% of its storage capacity in the next 110–347 years, which will affect recreational use, agricultural irrigation, fishing, and a one-megawatt hydroelectric power facility. Mitigation of lake shrinkage will require addressing landslide activity and sediment transport in the watershed, as well as urban expansion along the shores. View Full-Text
Keywords: Fewa Lake; landslides; bathymetry; sedimentation; NDWI; NDVI; urbanisation Fewa Lake; landslides; bathymetry; sedimentation; NDWI; NDVI; urbanisation
►▼ Show Figures 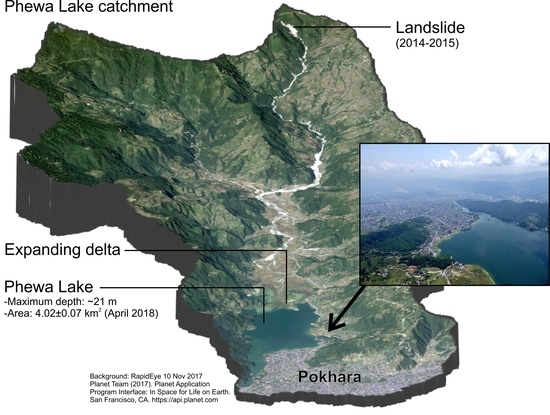