Validation and Comparison of MODIS C6.1 and C6 Aerosol Products over Beijing, China

This study presents a validation of aerosol optical thickness (AOT) and integrated water vapour (IWV) products provided by the European Space Agency (ESA) from multi-spectral imager (MSI) measurements on board the Sentinel-2 satellite (ESA-L2A). For that purpose, data from 94 Aerosol Robotic Network (AERONET) stations over Europe and adjacent regions, covering a wide geographical region with a variety of climate and environmental conditions and during the period between March 2017 and December 2018 have been used. The comparison between ESA-L2A and AERONET shows a better agreement for IWV than the AOT, with normalized root mean square errors (NRMSE) of 5.33% and 9.04%, respectively. This conclusion is also reflected in the values of R2, which are 0.99 and 0.65 for IWV and AOT, respectively. The study period was divided into two sub-periods, before and after 15 January 2018, when the Sentinel-2A spectral response functions of bands 1 and 2 (centered at 443 and 492 nm) were updated by ESA, in order to investigate if the lack of agreement in the AOT values was connected to the use of incorrect spectral response functions. The comparison of ESA-L2A AOT with AERONET measurements showed a better agreement for the second sub-period, with root mean square error (RMSE) values of 0.08 in comparison with 0.14 in the first sub-period. This same conclusion was attained considering mean bias error (MBE) values that decreased from 0.09 to 0.01. The ESA-L2A AOT values estimated with the new spectral response functions were closer to the correspondent reference AERONET values than the ones obtained using the previous spectral response functions. IWV was not affected by this change since the retrieval algorithm does not use bands 1 and 2 of Sentinel-2. Additionally, an analysis of potential uncertainty sources to several factors affecting the AOT comparison is presented and recommendations regarding the use of ESA-L2A AOT dataset are given. View Full-Text
Keywords: validation; aerosol optical depth; integrated water vapour; Sentinel-2; AERONET validation; aerosol optical depth; integrated water vapour; Sentinel-2; AERONET
►▼ Show Figures 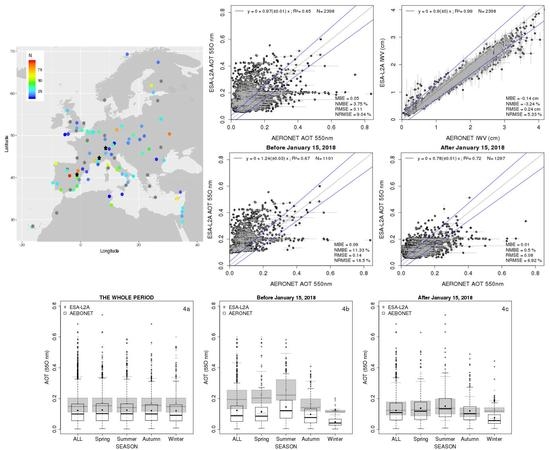