Drivers of Landscape Changes in Coastal Ecosystems on the Yukon-Kuskokwim Delta, Alaska

Rapid warming has occurred over the past 50 years in Arctic Alaska, where temperature strongly affects ecological patterns and processes. To document landscape change over a half century in the Arctic National Wildlife Refuge, Alaska, we visually interpreted geomorphic and vegetation changes on time series of coregistered high-resolution imagery. We used aerial photographs for two time periods, 1947–1955 and 1978–1988, and Quick Bird and IKONOS satellite images for a third period, 2000–2007. The stratified random sample had five sites in each of seven ecoregions, with a systematic grid of 100 points per site. At each point in each time period, we recorded vegetation type, microtopography, and surface water. Change types were then assigned based on differences detected between the images. Overall, 23% of the points underwent some type of change over the ~50-year study period. Weighted by area of each ecoregion, we estimated that 18% of the Refuge had changed. The most common changes were wildfire and postfire succession, shrub and tree increase in the absence of fire, river erosion and deposition, and ice-wedge degradation. Ice-wedge degradation occurred mainly in the Tundra Biome, shrub increase and river changes in the Mountain Biome, and fire and postfire succession in the Boreal Biome. Changes in the Tundra Biome tended to be related to landscape wetting, mainly from increased wet troughs caused by ice-wedge degradation. The Boreal Biome tended to have changes associated with landscape drying, including recent wildfire, lake area decrease, and land surface drying. The second time interval, after ~1982, coincided with accelerated climate warming and had slightly greater rates of change. View Full-Text
Keywords: Alaska; Arctic; tundra; boreal; climate change; shrub increase; aerial photography; remote sensing; vegetation; permafrost; thermokarst; fire Alaska; Arctic; tundra; boreal; climate change; shrub increase; aerial photography; remote sensing; vegetation; permafrost; thermokarst; fire
►▼ Show Figures 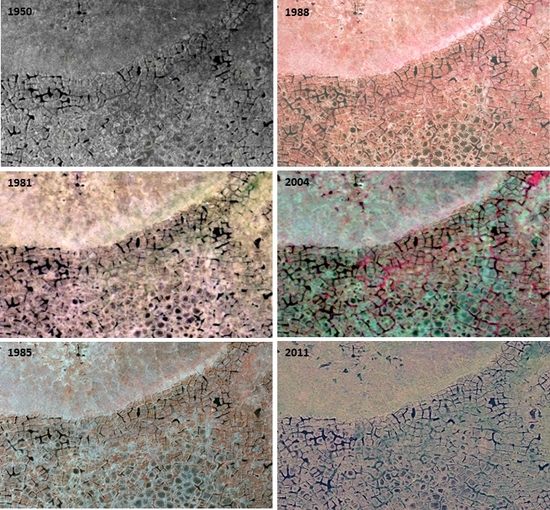