How Overtourism Threatens Large Urban Areas: A Case Study of the City of Wrocław, Poland
Previous Article in Special Issue

With the diffusion of wireless networks and mobile devices, anyone can provide recorded video and live-streaming video content. In the past, substantial manpower and funds were required to produce video content, whereas in recent years, video content has been produced using minimum capital and mobile devices. There are various live-streaming services such as Periscope on Twitter, YouTube Live, Facebook Live, Instagram Live, Twitch, Mixer, AfreecaTV, and V Live. Periscope, YouTube Live, Facebook Live, and Instagram Live provide video content on social network services, and any user can live-stream his or her own daily life or produce entertainment content. Twitch, acquired by Amazon in 2014, is specific to game content, even though various types of content related to food, cooking, and outdoor activities were provided [1]. Microsoft’s Mixer, launched in 2017, also focuses on game-related content, including E-sports, animation, and branded content [1]. AfreecaTV, the leading live-streaming service in South Korea, provides various types of video content, including “Sports,” “Food Shows,” “Games,” and “Music.” V Live, another live-streaming service in South Korea, focuses on content related to music and K-pop stars. While V Live’s content is largely related to K-pop, it recently started to cover beauty and classical music content.
The distinctive feature of live-streaming is “real-time,” wherein streamers and viewers can communicate directly in real-time. For example, V Live users can communicate with their favorite K-pop stars in real-time.
The demand for live-streaming services has increased due to global social network service providers like Facebook, Instagram, and YouTube actively launching live-streaming services. Numerous studies have investigated users’ motives, perceived value, and attitudes for watching live-streaming content and users’ intention to watch live-streaming content. However, no study has examined V Live services, which is the South Korean live-streaming service. V Live was launched by Naver, which is one of IT companies in South Korea and offers its own search engine. V Live focuses on entertainment content such as music and K-pop stars, whereas other live-streaming services mainly provide sports, games, and user-generated content. V Live is the only service that enables K-pop stars to live-stream in a natural manner and it provides original live-streaming content and recorded video content produced by entertainment agencies (outsourced production).
V Live is positively evaluated as an effective medium to advertise K-pop stars’ upcoming albums, dramas, or movies [2]. When an upcoming album, drama, or movie is promoted on V Live’s live-streaming services, keywords related to these upcoming works are usually ranked high in Naver’s real-time search rankings, which is one of Korea’s most popular search engines. As keywords rank highly in Naver’s search rankings—which are extensively followed in Korea—many K-pop stars try to upload their content on V Live. However, it is not easy for any V Live content to gain popularity as several factors affect users’ attention to V Live content.
This study aims to determine the kinds of V Live video content that gained popularity among viewers, especially focusing on characteristics of V Live video content. This study identifies characteristics of V Live’s free video content and aspects of the content that attract maximum interest from V Live viewers. In addition, based on this study’s results, we propose a direction for producing video content and budget allocation for video content production on V Live.
The rest of the paper is organized as follows. We briefly introduce practical articles and academic papers related to live-streaming services and the popularity of video content. We then describe the study’s methodology, and finally, we discuss results, implications, and directions for future studies.

V Live was launched by Naver in August 2015; while most of its content is free, paid content has been provided since 2017. V Live started its service specifically for content related to K-pop stars and allows K-pop stars and fans to communicate directly. In addition, content planned by outsourced companies such as entertainment management agencies are also distributed on V Live, making it the only online video service to focus on K-pop stars.
In addition to live-streaming content and recorded content (not live) and collaborations with professional producers and broadcasters, V Live has developed original, competitive, and exclusive content. For example, using “Happy Train,” K-pop stars and fans can share experiences and excitement while on a trip, and using “Lie-V,” K-pop stars live-stream in their pajamas; the filming set is decorated with the star’s own cherished possessions, creating a cozy atmosphere [3]. With “VS Live!”, a K-pop star plays a virtual reality (VR) game wearing a VR device in a chroma key background [3], and with “Run BTS!”, previously recorded, edited, and serial content relating to the South Korean hip-hop group BTS (Bangtan Boys) and original V Live content, fans can watch their favorite idols camping and gaming.
Currently, V Live’s content covers beauty, classical music, and overall entertainment services. In particular, V Live’s live-streaming service enables not only interaction between K-pop stars and fans, but also an elimination of the limit on offline space. For example, pianist Seong-Jin Cho held a recital in a small venue with 200 seats, but when it was broadcast live on V Live, approximately 100,000 cumulative viewers could appreciate his performance [4]. Moreover, the BTS concert held in London’s Wembley Stadium was live-streamed on V Live, and more than 140,000 viewers watched it around the globe [5].
The demand for V Live has been increasing. According to Naver’s reports, in the fourth quarter of 2017, the number of cumulative downloads surpassed 42 million. Among those viewers, overseas viewers (except South Korean viewers) accounted for 80% of total viewers, and younger viewers in the age group between 15 and 24 accounted for 79% of the total views [6,7]. In addition, according to a report by the international application analysis company App Annie, V Live sales ranked second-highest in South Korea and Thailand and fourth-highest in Singapore [8]. Thus, almost four years after V Live’s launch, its performance is gradually emerging, suggesting that it is securing a position as a global entertainment platform. So far, V Live has been developing video content related to the entertainment services, and we focus on V Live’s “Star channels” which are owned and run by K-pop stars.

The characteristics of live-streaming content were also investigated. The types of live-streaming content refer to the style and information characteristics of video content [16]. In previous studies, live-streaming contents of Periscope, Ustream, and YouNow were classified as follows: “To Chat” for communication between streamer and viewers, “Share Information,” to share information with viewers, “24/7,” to observe 24 h a day, seven days a week, and “Slice of Life,” to broadcast the streamer’s daily life [17]. Other categories included “Entertainment Media,” “Make Music,” “Animals,” “Nature,” “Gaming,” “Sports,” “News,” “Spirituality,” “Advertising,” “Food,” “Comedy,” “Fitness,” “Politics,” “Business Information,” “Science, Technology, Medicine (STM),” “Draw/Paint a Picture,” and “Nothing” [17]. Among 21 categories of live-streaming contents, “To Chat” accounted for the highest percentage (44.02%) and was considered to be the main content category [17]. In another study, 767 live-streaming contents of Meerkat and Periscope were classified into the following 21 categories [18]: “Chatting”; “Object, place, animal, etc.”; “Activity, craft, skill, etc.”; “Funny activity or event”; “Ask me anything (AMA)”; “Walking around”; “Showing scenery”; “Behind the scenes”; “Party or social gathering”; “Live news event”; “In a vehicle”; “How-to”; “Amateur sports, concerts, etc.”; “Recurring or regular stream”; “Cooking or preparing food”; “Weather”; “Dining or eating food”; “Professional performance”; “Audience participation”; “Talk show”; and “Gaming.”
Live-streaming services such as Periscope, AfreecaTV, and YouNow investigated in previous studies do not have an entry barrier for streamers [13,14,17]. There is no concept of “Original content” in such live-streaming services, but the video contents can be generated as desired by the streamer, and the video contents are mostly live-streaming, not recorded [17]. To produce video content on such live-streaming services, high costs and professional skills are not required.
Instead, V Live has an entry barrier to become a streamer, and a contract between V Live and a streamer (or an entertainment management agency) is necessary to start a channel. Only authorized individuals may own channels on V Live. As mentioned in Section 2, to enhance its own competitiveness among various online video services, V Live has been developing its own original content with novel topics by collaborating with professional producers and outsourced companies, such as entertainment management agencies. V Live’s content is produced in three ways: no production company (created by the streamer him/herself), V Live, and outsourced companies (See Table 2). Except for video content without a production company, the other two types of video content are live-streaming and recorded content [9]. The latter especially requires higher costs and time, including editing, subtitling, inserting background music, and inserting special effects.
Although previous studies have investigated characteristics of live-streaming content, few studies have examined entertainment-specific video content such as V Live, which is a mix of pre-planned and unplanned video content. Emerging popularity of V Live implies the popularity of K-pop stars and competitive video content of V Live. The goal of this study is to investigate the main factors that lead to success on V Live. In particular, we focus on the types of V Live content that is more attracted to consumers. The higher number of comments, hearts, and views V Live has, the more popular V Live is. A V Live’s “Heart” is the equivalent of a YouTube’s “Like.” We try to discover factors affecting the popularity of video content, and it is necessary to classify and identify the types of video content provided on V Live. Based on previous studies and data collected for this study, video content of V Live was classified into several categories (See Table 2).

In 2018, the top-ten K-pop stars (or groups) were honorably selected as the “Global Artist Top 10,” based on total scores of views, hearts, and comments on the video content, and fan attendance rate on each Star channel between January 1 and December 25, 2017. Fan attendance rate is a measure of how often fans visit their favorite K-pop star’s channel. However, details of the proportions of each score were not disclosed. In addition, V Live measures the popularity of each Star channel in the top three countries (See Figure 1). This study focused on the five most popular Star channels in South Korea. Other countries (China, the U.S., the Philippines, and Thailand) were excluded as cultural differences and market conditions could not be controlled for. Thus, the following top five K-pop groups were selected for this study: BTS, Nu’est, SEVENTEEN, GFRIEND, and TWICE.

In this section, we summarize the main findings and interpret these findings. Then, we discuss the implications and limitations of this study. Finally, we propose future research. 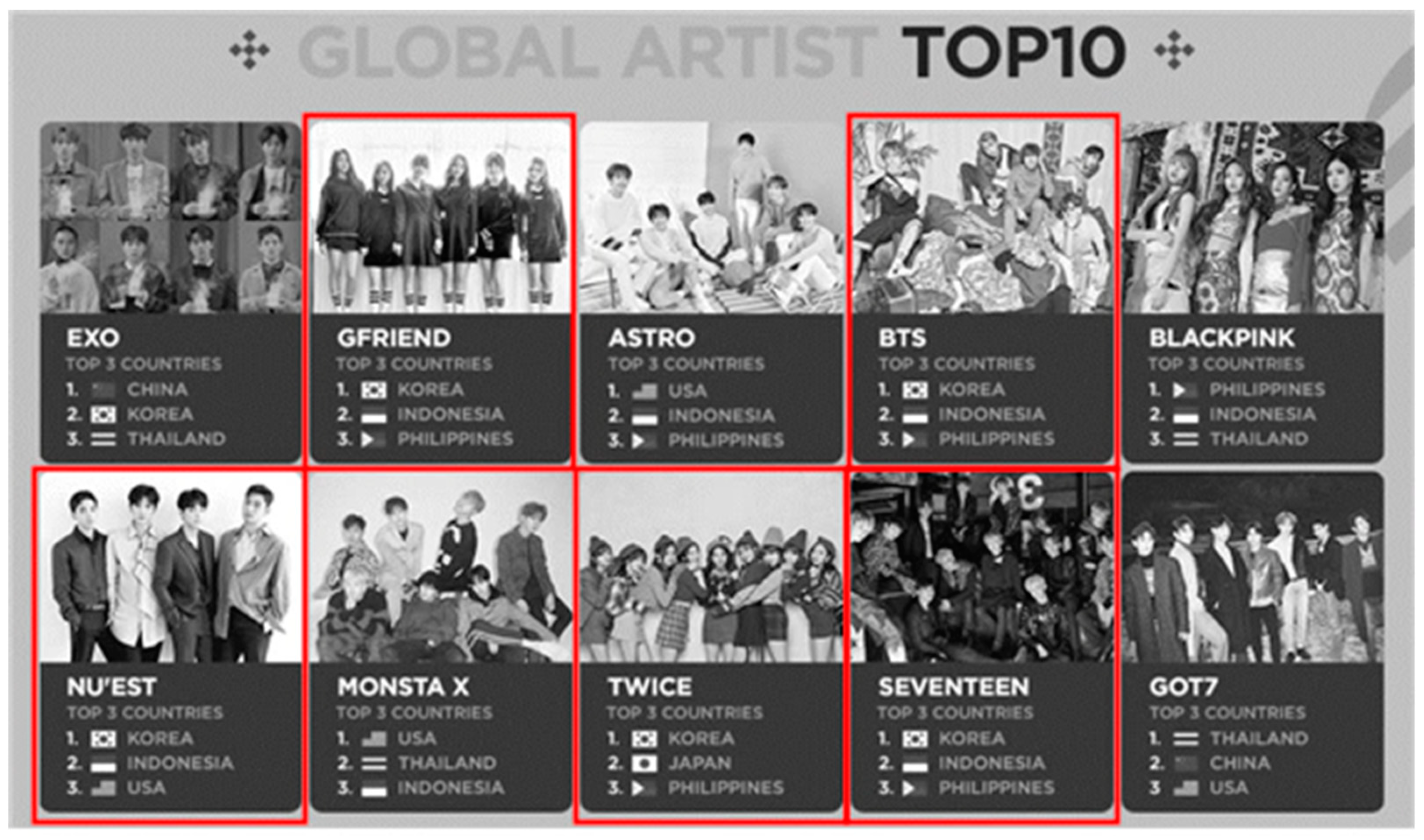