I Can’t Go to Work Tomorrow! Work-Family Policies, Well-Being and Absenteeism
Next Article in Special Issue

The Role of Agriculture in Ensuring Food Security in Developing Countries: Considerations in the Context of the Problem of Sustainable Food Production

The aim of the paper is to recognize the level of employment and gross value added (GVA) in agriculture in relation to the other sectors of the European Union economy. The following research tasks were formulated: analysis of employment levels and GVA in the sectors of economy in 2000 and 2018 as well as the relationship between employment and GVA, assessment of GVA per 1 person employed in the investigated sectors and its changes in the analysed years, and assessment of the scale of surplus employment in agriculture assuming that GVA per 1 person employed in this sector would be equal to the average level reached in the industry and the services sectors. Comparative analysis and the deduction method were used in the study. Correlation coefficients between the level of employment in individual sectors and GVA per 1 person employed in the time series covering the years 2000–2008 were also calculated. A new measure of the “goal” of employment reduction in agriculture has been proposed, related to the measurement of the distance between agriculture and other sectors in terms of GVA generated per 1 employed—the Excess Employment Rate In The Agricultural Sector (EERAS). The research was based on EUROSTAT data from the years of 2000 and 2018. The process of changes in the sectoral structure of employment will probably be determined by the growth rate of demand for services, structural adjustment referring to matching the characteristics of the agricultural population to the demand for labour force in the services sector and the pace of structural transformations in rural areas. Rationalisation of employment levels in agriculture promotes improvement of its economic and social sustainability. Instruments based on financial transfers from nonagricultural sectors to agriculture should play a secondary role, since they are a burden to more efficient sectors, and in the long term, they may hinder reduction of employment in agriculture. However, due to the inevitable differences in productivity observed between agriculture and the nonagricultural sectors, at a technologically, economically, ecologically and socially justified level of employment in agriculture, transfers of the surplus generated in the secondary and tertiary sectors need at least to reduce, if not eliminate, economic consequences of these differences. View Full-Text
Keywords: sectoral structure of employment; Common Agricultural Policy; sustainable agriculture; Excess Employment Rate sectoral structure of employment; Common Agricultural Policy; sustainable agriculture; Excess Employment Rate
►▼ Show Figures 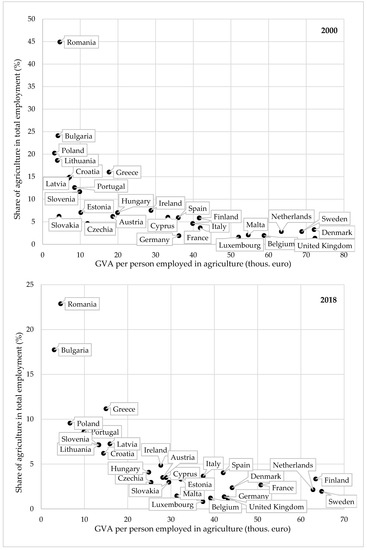 Kołodziejczak, W. Employment and Gross Value Added in Agriculture Versus Other Sectors of the European Union Economy. Sustainability 2020, 12, 5518.


Kołodziejczak W. Employment and Gross Value Added in Agriculture Versus Other Sectors of the European Union Economy. Sustainability. 2020; 12(14):5518.


Kołodziejczak, Włodzimierz. 2020. "Employment and Gross Value Added in Agriculture Versus Other Sectors of the European Union Economy" Sustainability 12, no. 14: 5518.