The Role of Electricity Balancing and Storage: Developing Input Parameters for the European Calculator for Concept Modeling
Previous Article in Journal

Yusuf A. Al-Turki
and

This paper presents a techno-economic feasibility evaluation for a grid-connected photovoltaic energy conversion system on the rooftop of a typical residential building in Jeddah, one of the major cities in Saudi Arabia. In Saudi Arabia, electric energy consumption is the highest in the domestic sector, with 48.1% of the total electricity consumption. As the power generation in Saudi Arabia mainly relies on conventional resources, environmental pollution and energy sustainability are major concerns. To minimize these issues, the Saudi government is in the process of maximizing the utilization of renewable energy resources for power generation. Investing in solar energy in Saudi Arabia is important because the country is witnessing a rapid increase in load demand, with annual growth rates of 6%. In this paper, the system advisor model software for renewable energy modeling has been utilized to perform a techno-economic feasibility analysis of a residential grid-connected solar photovoltaic (PV) system, which is proposed for a typical apartment in Saudi Arabia, on the basis of various key performance indicators, namely: yield factor, capacity factor, performance ratio, levelized cost of energy, net present value, internal rate of return, and payback period. A sensitivity analysis that investigates the impact of varying techno-economic parameters on system performance and feasibility is also discussed. The size of the PV system for a typical Saudi Arabian apartment is estimated to be 12.25 kW. Results have shown that the proposed system can generate 87% of the electricity needs of an apartment. The technical analysis showed that the capacity factor and the performance ratio were 22% and 78% respectively. The levelized cost of energy and net present value revealed competitive figures of 0.0382 $/kWh and $4378, respectively. The investigations indicate that residential PV installations are an effective option for energy management in the country. View Full-Text
Keywords: solar photovoltaic; techno-economic feasibility; SAM; residential buildings solar photovoltaic; techno-economic feasibility; SAM; residential buildings
►▼ Show Figures 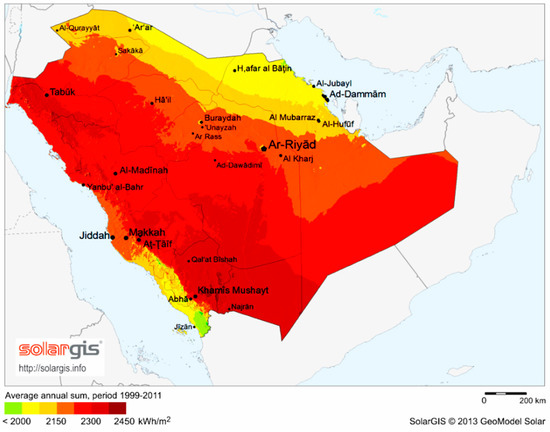