Intercultural Education for Sustainability in the Educational Interventions Targeting the Roma Student: A Systematic Review
Next Article in Special Issue

Antecedents of Consumers’ Intention to Purchase Energy-Efficient Appliances: An Empirical Study Based on the Technology Acceptance Model and Theory of Planned Behavior

Previous environmental sustainability studies have examined only limited type of pro-environmental behaviour (PEB; e.g., recycling), but have not explored relationships among various types or dimensions of PEBs. This paper explores six types of PEBs (i.e., activist, avoider, green consumer, green passenger, recycler and utility saver) and investigates their antecedents and interrelationships between two ethnic groups—Malays and Chinese in Malaysia. Survey data from 581 respondents, comprising 307 Malays and 274 Chinese, were used to assess the research model. To conduct multi-group analysis, the study used partial least squares structural equation modelling in SmartPLS 3. The study extends the Value-Belief-Norm (VBN) theory by using social norms to predict PEBs. The results suggest that social norms predict each type of PEB, in contrast to other constructs in VBN theory, except for utility-saving behaviours. The findings also reveal some similarities as well as differences between Malays and Chinese, indicating that the two ethnic groups are not homogeneous. The study is the first to simultaneously study six types of PEB and to examine the differences between Malays and Chinese on PEB constructs and offers a valuable contribution to the literature by extending VBN theory to social norms and PEB. View Full-Text
Keywords: value-belief-norm; pro-environmental behaviours; extended VBN; social norms; multi-group analysis; conscious consumption; ethnicity value-belief-norm; pro-environmental behaviours; extended VBN; social norms; multi-group analysis; conscious consumption; ethnicity
►▼ Show Figures 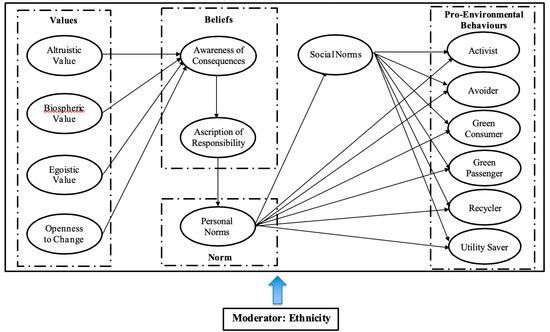