Photostability of Topical Agents Applied to the Skin: A Review
Previous Article in Journal

A liposomes-in-hydrogel system as an advanced wound dressing for dermal delivery of curcumin was proposed for improved chronic wound therapy. Curcumin, a multitargeting poorly soluble active substance with known beneficial properties for improved wound healing, was incorporated in deformable liposomes to overcome its poor solubility. Chitosan hydrogel served as a vehicle providing superior wound healing properties. The novel system should assure sustained skin delivery of curcumin, and increase its retention at the skin site, utilizing both curcumin and chitosan to improve the therapy outcome. To optimize the properties of the formulation and determine the effect of the liposomal charge on the hydrogel properties, curcumin-containing deformable liposomes (DLs) with neutral (NDLs), cationic (CDLs), and anionic (ADLs) surface properties were incorporated in chitosan hydrogel. The charged DLs affected the hydrogel’s hardness, cohesiveness, and adhesiveness. Importantly, the incorporation of DLs, regardless of their surface charge, in chitosan hydrogel did not decrease the system’s bioadhesion to human skin. Stability testing revealed that the incorporation of CDLs in hydrogel preserved hydrogel´s bioadhesiveness to a higher degree than both NDLs and ADLs. In addition, CDLs-in-hydrogel enabled the most sustained skin penetration of curcumin. The proposed formulation should be further evaluated in a chronic wound model. View Full-Text
Keywords: curcumin; deformable liposomes; liposome surface charge; hydrogel; chitosan; wound therapy curcumin; deformable liposomes; liposome surface charge; hydrogel; chitosan; wound therapy
►▼ Show Figures 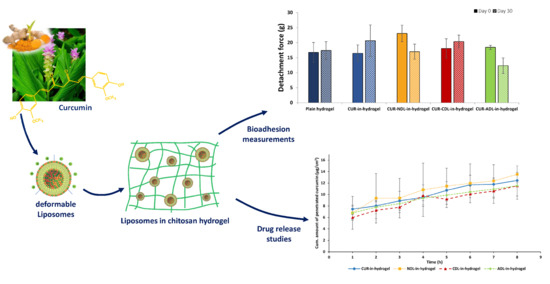