Exposure of Wild Ungulates to the Usutu and Tick-Borne Encephalitis Viruses in France in 2009–2014: Evidence of Undetected Flavivirus Circulation a Decade Ago
Previous Article in Special Issue

Background: Enterovirus 71 (EV71) is the main pathogen that causes severe hand, foot, and mouth disease with fatal neurological complications. However, its neurovirulence mechanism is still unclear. Candidate virulence sites were screened out at structural protein VP1, but the function of these candidate virulence sites remains unclear. Several studies have shown that autophagy is associated with viral replication. However, the relationship between VP1 and autophagy in human neurons has not been studied. Methods: A recombinant virus—SDLY107-VP1, obtained by replacing the VP1 full-length gene of the SDLY107 strain with the VP1 full-length gene of the attenuated strain SDJN2015-01—was constructed and tested for replication and virulence. We then tested the effect of the recombinant virus on autophagy in nerve cells. The effect of autophagy on virus replication was detected by western blot and plaque test. Finally, the changes of mTOR signaling molecules during EV71 infection and the effect of mTOR on virus replication at the RNA level were detected. Results: Viral recombination triggered virulence attenuation. The replication ability of recombinant virus SDLY107-VP1 was significantly weaker than that of the parent strain SDLY107. The SDLY107 strain could inhibit autophagic flux and led to accumulation of autophagosomes, while the SDLY107-VP1 strain could not cause autophagosome accumulation. The synthesis of EV71 RNA was inhibited by inhibiting mTOR. Conclusions: Replacement of VP1 weakened the replication ability of virulent strains and reduced the level of autophagy in nerve cells. This autophagy facilitates the replication of virulent strains in nerve cells. VP1 is an important neurovirulence determinant of EV71, which affects virus replication by regulating cell autophagy. mTOR is a key molecule in this type of autophagy. View Full-Text
Keywords: EV71; VP1; autophagy; virus replication EV71; VP1; autophagy; virus replication
►▼ Show Figures 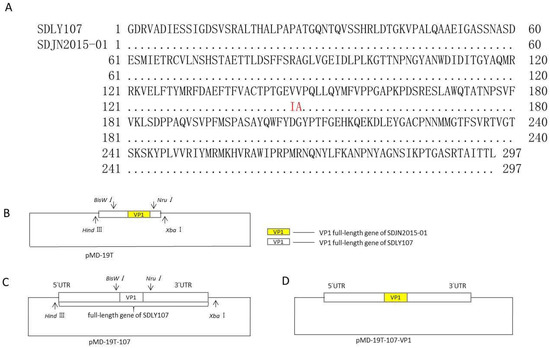