Proteasome is a large protein complex, which degrades most intracellular proteins. It regulates numerous cellular processes, including the removal of misfolded or unfolded proteins, cell cycle control, and regulation of apoptosis. However, the function of proteasome subunits in viral immunity has not been well characterized. In this study, we identified PSMB1, a member of the proteasome β subunits (PSMB) family, as a negative regulator of innate immune responses during viral infection. Knockdown of PSMB1 enhanced the RNA virus-induced cytokine and chemokine production. Overexpression of PSMB1 abolished virus-induced activation of the interferon-stimulated response element (ISRE) and interferon beta (IFNβ) promoters. Mechanistically, PSMB1 inhibited the activation of RIG-I-like receptor (RLR) and Toll-like receptor 3 (TLR3) signaling pathways. PSMB1 was induced after viral infection and its interaction with IKK-ε promoted degradation of IKK-ε through the ubiquitin-proteasome system. Collectively, our study demonstrates PSMB1 is an important regulator of innate immune signaling. View Full-Text
Keywords: PSMB1; IKK-ε; innate immunity; cytokine; RIG-I; TLR3 PSMB1; IKK-ε; innate immunity; cytokine; RIG-I; TLR3
►▼ Show Figures 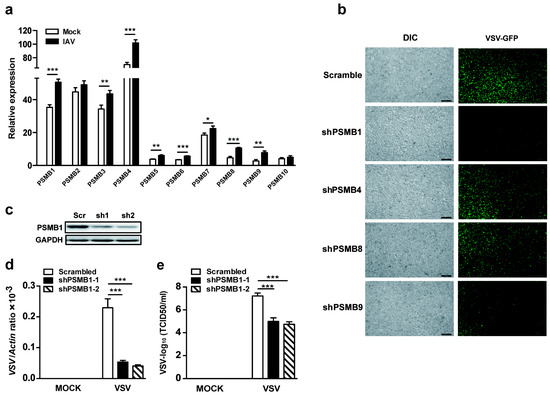