Respiratory syncytial virus (RSV) is a major cause of respiratory infectious disease in infants and young children. Dendritic cells (DCs) and macrophages (MACs) are known to play important roles in RSV recognition, and in the production of type I interferons (IFNs) and pro-inflammatory cytokine in RSV infection. Toll-like receptor 7 (TLR7), myeloid differentiation primary response 88 (MyD88), and mitochondrial antiviral-signaling protein (MAVS) are known to be important for the RSV sensing pathway in DCs and MACs. However, despite the critical roles of type I IFNs in the anti-RSV immune response, the pattern recognition receptors (PRRs) that are required for RSV sensing in DCs and MACs remain unclear. Here, we investigate the pathway activated by RSV A2 strain infection using an IFN-β/YFP reporter mouse model to visualize IFN-β-producing cells and in vitro RSV infection in bone marrow-derived DCs (BM-DCs) and macrophages (BM-DMs). We present our finding that MyD88, but not TLR7, are important for RSV recognition and type I IFN and pro-inflammatory production in DCs and MACs. MAVS-deficient BM-DCs and BM-DMs show impaired induction of IFN-β production upon RSV stimulation, and this effect is RSV replication-dependent. Our study provides information on cell type-specific PRR requirements in innate immune responses against RSV infection.
Keywords: Respiratory syncytial virus; TLR7; MyD88; MAVS; Type I interferon; Dendritic cell; Macrophage Respiratory syncytial virus; TLR7; MyD88; MAVS; Type I interferon; Dendritic cell; Macrophage

Respiratory syncytial virus (RSV) is a leading cause of respiratory disease in infants and young children, causing recurrent childhood wheezing or asthma [1,2]. Most infants are infected with RSV at least once within the first 2 years of life; many suffer RSV-induced pathogenicity and may suffer repeated infections throughout life [3]. Although many attempts have been made to develop an RSV vaccine, no vaccine has been approved to date [4].
Type I interferon (IFN) production is an immediate innate immune response to viral infection, and type I IFNs play an important role in the antiviral response to RSV infection [5]. Although RSV has evolved escape strategies to maintain infectivity during type I IFN-induced antiviral responses, several reports have shown that RSV can induce type I IFN production [6]. A number of studies have suggested that dendritic cells (DCs) and macrophages (MACs) can secrete type I IFNs when infected with RSV [7]. However, the identification of cell types that can secrete type I IFNs during RSV infection and reliable verification of this secretion are required.
RSV infection or uptake by resident MACs and DCs incites a direct antiviral response through cytokines and chemokines [8]. These cells have pattern recognition receptors (PRRs), Toll-like receptors (TLRs), and retinoic acid-inducible gene-I (RIG-I)-like receptors (RLRs), which recognize pathogen-associated molecular patterns (PAMPs) on the pathogen [9]. These immune cells have different levels of PRRs, and the cell type-specific expression of PRRs plays a unique role in the innate immune response. In DCs and MACs, TLRs are required for RSV sensing, initiation of type I IFN production, and pro-inflammatory cytokine secretion; other reports also show that the RIG-I/mitochondrial antiviral-signaling protein (MAVS) pathway has an important role in the innate immune response to RSV infection [10,11,12]. Therefore, it is important to investigate these claims and determine which pathway is the most important in RSV infection.
Here, we investigated the cellular production of IFN-β in RSV A2 strain (hereafter referred to as RSV), one of the major strain of RSV, infection by using an IFN-β/YFP reporter mouse, a credible and unbiased tool for the visualization and spatiotemporal tracking of IFN-β-producing cells. Further, we determined the signaling pathway activated by RSV to produce type I IFN and proinflammatory cytokines. We found that myeloid differentiation primary response 88 (MyD88) and MAVS, but not TLR7, are important for RSV recognition and type I IFN production in DCs and MACs.

IFN-β/YFP reporter (B6.129-Ifnb1tm1Lky/J) [13], MyD88-deficient (B6.129P2(SJL)-Myd88tm1.1Defr/J) [14], TLR7-deficient (B6.129S1-Tlr7tm1Flv/J) [15], and MAVS-deficient (B6.129S1-Tlr7tm1Flv/J) [16] mice have been described previously. TLR7 and MAVS-deficient mice were purchased from The Jackson Laboratory. IFN-β/YFP reporter mice, provided by Suk-Jo Kang (KAIST), were crossed with TLR7-deficient, MyD88-deficient, or MAVS-deficient mice. All mice were bred in a specific pathogen-free facility at Korea Advanced Institute of Science and Technology (KAIST), and all procedures were in accordance with the guidelines and policies for rodent experimentation provided by the Institutional Animal Care and Use Committee (IACUC) of KAIST. This study was approved by the IACUC of KAIST (KA2013-55, October, 24, 2013).

The A2 strain of RSV was kindly provided by Dr. Jun Chang (Ewha Womans University). RSV was grown in HEp-2 cells and titrated for infectivity [17,18]. In detail, MOI = 0.01 of RSV was infected with mono-layers of HEp-2 cell culture in 40 mL of 10% fetal bovine serum (FBS; Hyclone) containing DMEM (Welgene) in T-175 flask (SPL). When extensive syncytia were observed around 4 to 5 days after RSV infection, viruses contained cell-culture supernatants were harvested and concentrated at 23,000 rpm of ultra-centrifugation for 45 min in 4 °C. The RSV pellet were re-suspended in Dulbecco’s Phosphate-Buffered Salines (DPBS) (Welgene). RSV titer was determined using an RSV plaque assay [19]. In detail, 400 μL of serial 10-fold diluted RSV in serum-free DMEM were infected with mono-layers of HEp-2 cell cultures in 6-well plate (SPL) for 2 h and incubated at 37 °C with shaking every 15 min. Medium were removed after 2 h of infection, 3 mL of 2% agarose in 10% FBS containing DMEM were added and incubated for 5 days. Cells were then fixed with 1% formaldehyde in DPBS and solidified agarose gels were removed. Next, Cells were stained with 0.05% of natural red (Sigma Aldrich) and RSV plaques were counted. For the inactivation of RSV, inactivated RSV was achieved by heating virus at 95 °C for 15 min. RSV stock in DPBS was stored at -80 °C without sucrose. To maintain RSV infectivity, we titrated RSV virus stocks again before the related experiments.

3.1. BM-DCs and BM-DMs Produce IFN-β in Response to RSV A2 Strain Infection

Previous studies have shown that DCs and MAC cells produce type I IFN during RSV infection [21,22]. Although type I IFN is required for anti-RSV immune responses, type I IFNs are difficult to detect due to their transient expression. To overcome this problem, we analyzed the secretion of type I IFN by flow cytometry using IFN-β/YFP reporter mice. It is known that IFN-β secretion of TLR-stimulated immune cells from WT and IFN-β/YFP reporter mice is comparable [13]. To determine the IFN-β-producing capacity of DCs and MACs, GM-CSF-derived BM-DCs and M-CSF-derived BM-DMs from IFN-β/YFP reporter mice were stimulated with RSV. RSV stimulation resulted in BM-DCs and BM-DMs producing IFN-β in a viral particle dose-dependent and replication-dependent manner (Figure 1A,B), but the frequency of YFP+ BM-DMs was lower than that of BM-DCs upon RSV stimulation at the same dose.
In addition, costimulatory molecule expression was increased in RSV-stimulated BM-DCs and BM-DMs, but heat-inactivated RSV had limited ability to induce IFN-β and expression of costimulatory molecules in BM-DCs, while the induction of IFN-β is slightly increased in heat-inactivated RSV-treated BM-DMs. Taken together, we confirmed previous reports that DCs and MACs are type I IFN-producing cells on RSV infection, by using IFN-β/YFP reporter mice; additionally, we found that DCs produce more type I IFN than do MACs. Moreover, we revealed that maturation of DCs is RSV replication-dependent.

3.2. The MyD88- and TLR7-Mediated Pathways are Required to Induce IFN-β in BM-DCs

RSV can be detected by the TLR-dependent pathway in DCs [23]. In this case, TLR family proteins, such as TLR2, TLR3, TLR4, and TLR7/8 are known to sense RSV and initiate innate anti-viral immune responses in DCs. To investigate which signaling pathway drives type I IFN production in DCs in response to RSV infection, BM-DCs were generated from MyD88- or TLR7-deficient IFN-β/YFP reporter mice. MyD88-deficient, but not TLR-7-deficient, BM-DCs showed impaired induction of IFN-β production upon RSV stimulation (Figure 2A and Figure S1).
To determine whether these data from BM-DCs reflect secreted IFN-β, we measured IFN-β and pro-inflammatory cytokine levels from these supernatants. After RSV stimulation, IFN-β secretion was impaired in supernatants from MyD88-deficient, but not TLR-7-deficient, BM-DCs (Figure 2B) and this effect was RSV replication-dependent. These results are consistent with our flow cytometric findings. The production of the pro-inflammatory cytokine IL-6 was severely affected in MyD88-deficient BM-DCs upon RSV stimulation (Figure 2C), and this effect was RSV replication-independent. Taken together, we conclude that MyD88 is required for proper innate immune responses in DCs against RSV infection, while TLR7 was found to be dispensable in DCs for RSV sensing.

3.3. The MyD88-Mediated Pathways are Required to Induce IFN-β in BM-DMs

The authors would like to thank the members of the Laboratory of Host Defenses for helpful advice on experiments and data discussions. The authors also thank A. Iwasaki (Yale University) for MyD88 deficient mice and L929 cell line producing M-CSF. 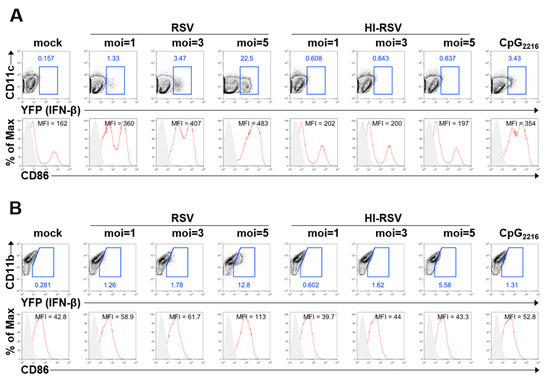 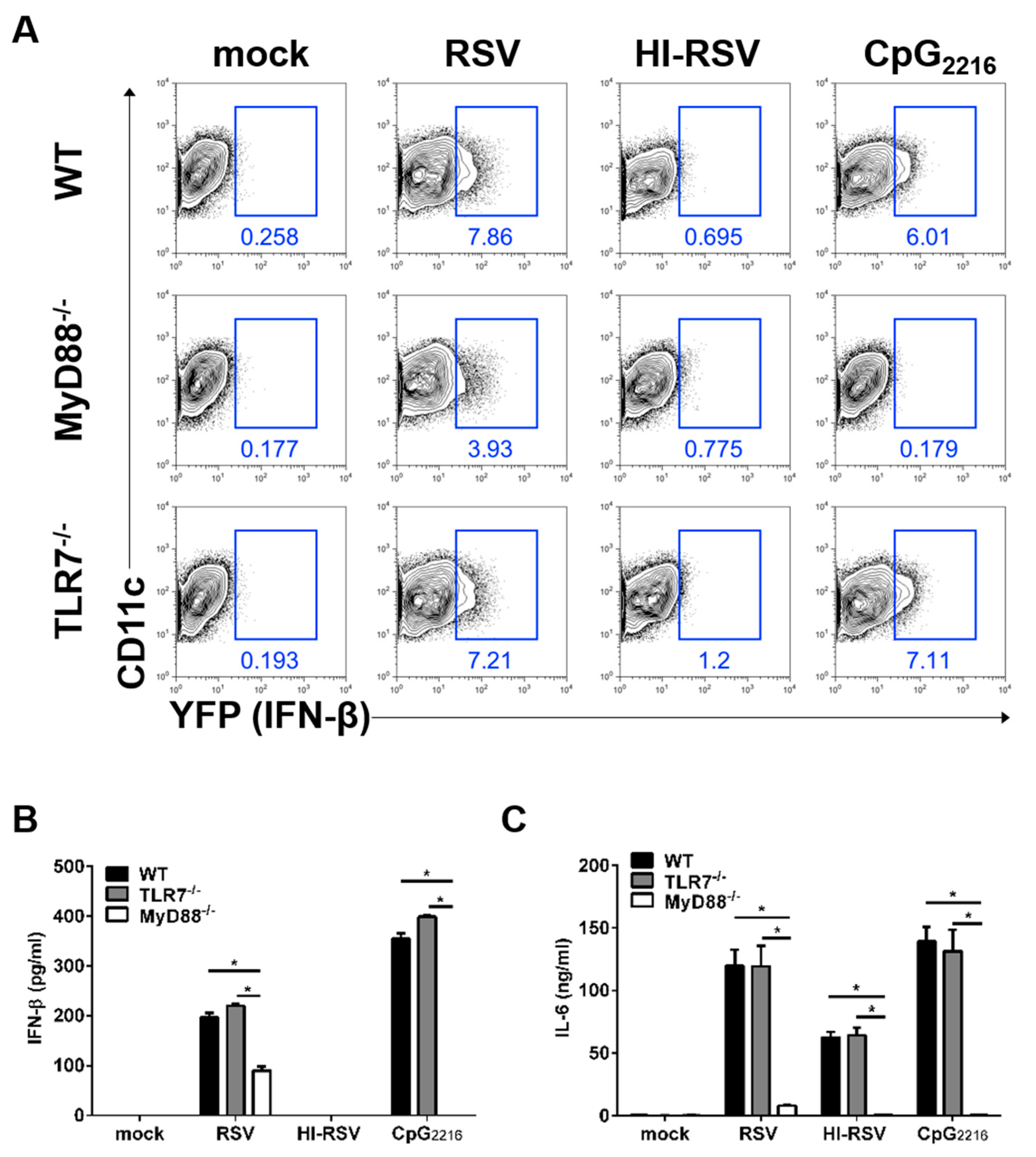 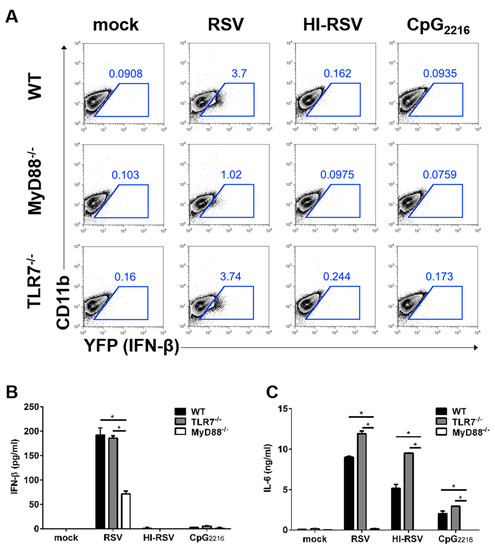 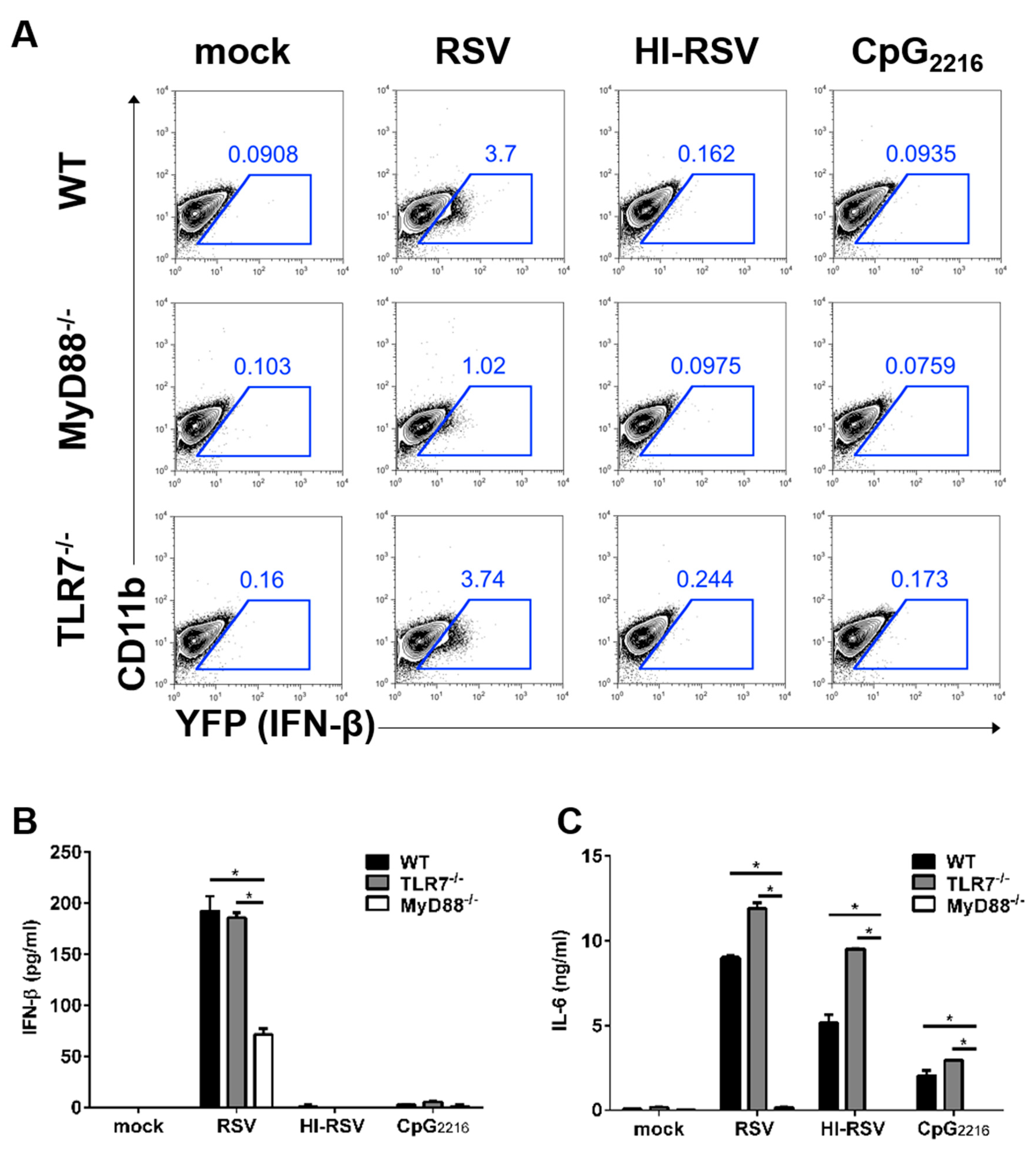