Green Infrastructure—Countering Ecosystem Fragmentation: Case Study of a Municipality in the Carpathian Foothills
Next Article in Special Issue

Spatial and Temporal Changes in Vegetation in the Ruoergai Region, China
Previous Article in Special Issue

Site Index has been widely used as an age normalised metric in order to account for variation in forest height at a range of spatial scales. Although previous research has used a range of modelling methods to describe the regional variation in Site Index, little research has examined gains that can be achieved through the use of regression kriging or spatial ensemble methods. In this study, an extensive set of environmental surfaces were used as covariates to predict Site Index measurements covering the environmental range of Pinus radiata D. Don plantations in Chile. Using this dataset, the objectives of this research were to (i) compare predictive precision of a range of geostatistical, parametric, and non-parametric models, (ii) determine whether significant gains in precision can be attained through use of regression kriging, (iii) evaluate the precision of a spatial ensemble model that utilises predictions from the five most precise models, through using the model prediction with lowest error for a given pixel, and (iv) produce a map of Site Index across the study area. The five most precise models were all geostatistical and they included ordinary kriging and four regression kriging models that were based on partial least squares or random forests. A spatial ensemble model that was constructed from these five models was the most precise of those developed (RMSE = 1.851 m, RMSE% = 6.38%) and it had relatively little bias. Climatic and edaphic variables were the strongest determinants of Site Index and, in particular, variables that are related to soil water balance were well represented within the most precise predictive models. These results highlight the utility of predicting Site Index using a range of approaches, as these can be used to construct a spatial ensemble that may be more precise than predictions from the constituent models. View Full-Text
Keywords: ensemble of models; site productivity; machine learning; precision silviculture ensemble of models; site productivity; machine learning; precision silviculture
►▼ Show Figures 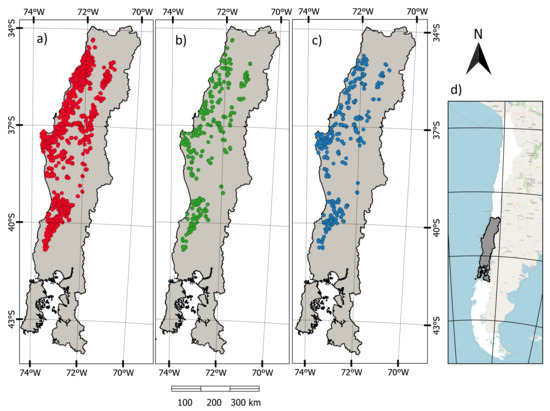