Economic Performance of Genetically Improved Reforestation Material in Joint Production of Timber and Carbon Sequestration: A Case Study from Finland
Next Article in Special Issue

The Variation in Water Consumption by Transpiration of Qinghai Spruce among Canopy Layers in the Qilian Mountains, Northwestern China

Despite their importance as mortality factors of many insects, the detailed biology and ecology of parasitoids often remain unknown. To gain insights into the spatiotemporal biology of insect parasitoids in interaction with their hosts, modeling of temperature-dependent development, reproduction, and survival is a powerful tool. In this first article of a series of three, we modeled the biology of Tranosema rostrale at the seasonal level with a three-species individual-based model that took into account the temperature-dependent performance of the parasitoid and two of its hosts. The predicted activity of the first adult parasitoid generation closely matched the seasonal pattern of attack on the spruce budworm, Choristoneura fumiferana (Lepidoptera: Tortricidae). The model predicted 1–4 full generations of T. rostrale per year in eastern North America. The generations were generally well synchronized with the occurrence of larvae of a probable alternate host, the obliquebanded leafroller Choristoneura rosaceana (Lepidoptera: Tortricidae), which could be used as an overwintering host. Spatial differences in predicted performance were caused by complex interactions of life-history traits and synchrony with the overwintering host, which led to a better overall performance in environments at higher elevations or along the coasts. Under a climate warming scenario, regions of higher T. rostrale performance were predicted to generally move northward, making especially lower elevations in the southern range less suitable. View Full-Text
Keywords: biodiversity; ecology; environment; forest; global change; insect; parasitoids; spruce budworm; obliquebanded leafroller; seasonal biology; host synchrony biodiversity; ecology; environment; forest; global change; insect; parasitoids; spruce budworm; obliquebanded leafroller; seasonal biology; host synchrony
►▼ Show Figures 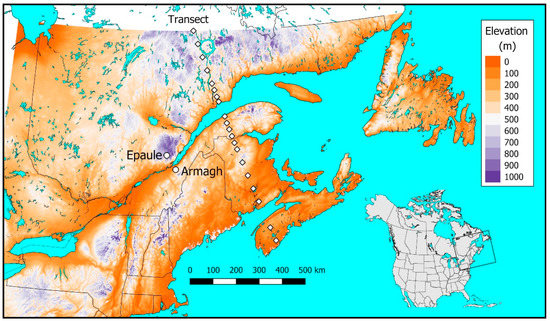