In this study, we examined the relationship between the effect of a zinc coating on protecting carbon steel against biofilm formation in both air and water environments. SS400 carbon steel coupons were covered with a zinc thermal spray coating or copper thermal spray coating. Coated coupons were exposed to either air or water conditions. Following exposure, the surface conditions of each coupon were observed using optical microscopy, and quantitatively analyzed using an x-ray fluorescence analyzer. Debris on the surface of the coupons was used for biofilm analysis including crystal violet staining for quantification, Raman spectroscopic analysis for qualification, and microbiome analysis. The results showed that the zinc thermal spray coating significantly inhibited iron corrosion as well as biofilm formation in both air and water environments. The copper thermal spray coating, however, accelerated iron corrosion in both air and water environments, but accelerated biofilm formation only in a water environment. microbially-influenced-corrosion-related bacteria were barely detected on any coupons, whereas biofilms were detected on all coupons. To summarize these results, electrochemical corrosion is dominant in an air environment and microbially influenced corrosion is strongly involved in water corrosion. Additionally, biofilm formation plays a crucial rule in carbon steel corrosion in both air and water, even though microbially-influenced-corrosion-related bacteria are barely involved in this corrosion. View Full-Text
Keywords: thermal spray; corrosion; zinc; copper; steel thermal spray; corrosion; zinc; copper; steel
►▼ Show Figures 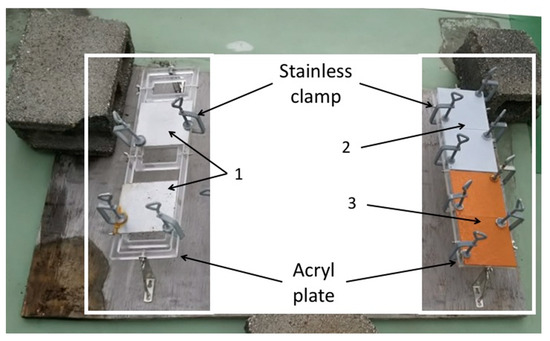