Interpreting the Terahertz Spectrum of Complex Materials: The Unique Contribution of the Bayesian Analysis
Previous Article in Special Issue

The linear temperature dependence of critical current density Jc∝((Tc-T)/(Tc-T0)) and the nonlinear functions of Jc∝(1-(T/Tc)2)α with the exponent α equal to 1, 3/2, and 2 are used to calculate the dynamic levitation force, the temperature distribution, and the current density distribution of the high-temperature superconducting (HTS) YBaCuO bulk over a permanent magnetic guideway (PMG). The calculations were based on the H-formulation and E–J power law. The model of the HTS bulk and the PMG has been built as a geometric entity by finite element software. To simulate the magnetic field fluctuation caused by the PMG arrangement irregularity, a small amplitude vibration in the vertical direction is applied to the PMG during the calculations. Both the low vibration frequency of 2 Hz and the high vibration frequency of 60 Hz are analyzed as the representative converted linear speeds of 34 km/h and 1018 km/h for magnetic levitation (Maglev) application. We compared the electromagnetic-thermo-force modeling with the experiments and the previous model without considering the thermal effect. The levitation force computed by the Jc–T relationship, in which Jc is proportional to (1-(T/Tc)2)2, is found to be in best agreement with the experimental data under quasi-static conditions. This work can provide a reference for the HTS electromagnetic-thermal-force coupling reproduction method of HTS Maglev at high speed. View Full-Text
Keywords: high-temperature superconducting bulk; modeling; magnetic levitation; electromagnetic-thermo-force coupling; high speed high-temperature superconducting bulk; modeling; magnetic levitation; electromagnetic-thermo-force coupling; high speed
►▼ Show Figures 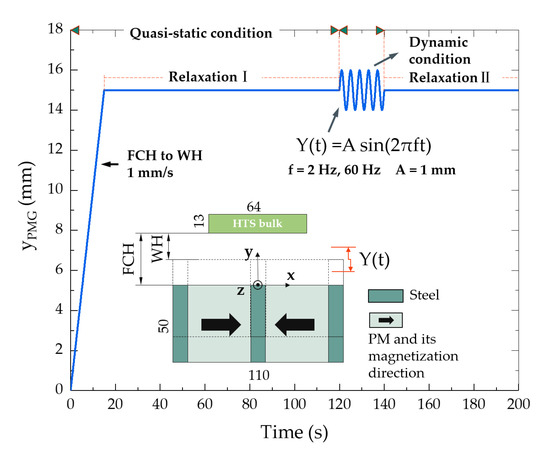