Inorganic Membranes: Preparation and Application for Water Treatment and Desalination

The objective of this research is to develop an experimental-theoretical analysis about the influence of the cooling medium and the geometry of the welding bead profile in fatigue life and the associated parameters with structural integrity of welded joints. A welded joint with cruciform geometry is considered using SMAW (Shielded Metal ArcWelding), plates in structural steel ASTM A36 HR of 8 mm of thickness, and E6013 electrode input. A three-dimensional computational model of the cruciform joint was created using the finite element method. For this model, the surface undulation of the cord and differentiation in the mechanical properties of the fusion zone were considered, the heat-affected zone (HAZ) and base material, respectively. In addition, an initial residual stress field, which was established experimentally, was considered. The results were a set of analytical expressions for the weld magnification factor Mk. It was found that values for the latter decrease markedly in function of the intensity of the cooling medium used in the post welding cooling phase, mainly due to the effect of the residual compressive stresses. The obtained models of behavior of the weld magnification factor are compared with the results from other researchers with some small differences, mainly due to the inclusion of the cooling effect of the post weld and the variation of the leg of the weld bead. The obtained analytical equations in the present research for Mk can be used in management models of life and structural integrity for this type of welded joint. View Full-Text
Keywords: cruciform joint; fatigue; semi-elliptical crack; cooling; weld magnification factor; fracture mechanics cruciform joint; fatigue; semi-elliptical crack; cooling; weld magnification factor; fracture mechanics
►▼ Show Figures 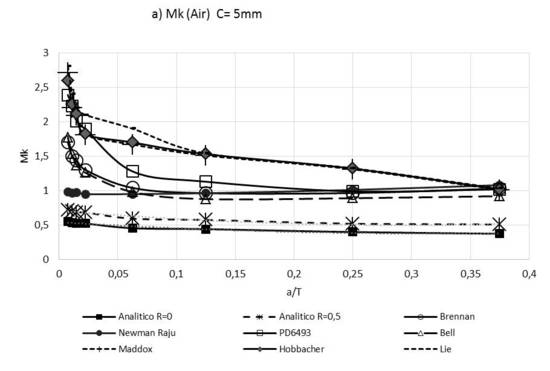