The paper deals with the modeling and optimization of an integrated multi-component energy system. On-off operation and presence-absence of components must be described by means of binary decision variables, besides equality and inequality constraints; furthermore, the synthesis and the operation of the energy system should be optimized at the same time. In this paper a hierarchical optimization strategy is used, adopting a genetic algorithm in the higher optimization level, to choose the main binary decision variables, whilst a MILP algorithm is used in the lower level, to choose the optimal operation of the system and to supply the merit function to the genetic algorithm. The method is then applied to a distributed generation system, which has to be designed for a set of users located in the center of a small town in the North-East of Italy. The results show the advantage of distributed cogeneration, when the optimal synthesis and operation of the whole system are adopted, and significant reduction in the computing time by using the proposed two-level optimization procedure. View Full-Text
Keywords: district heating; multi-objective evolutionary optimization; distributed cogeneration; optimal operation district heating; multi-objective evolutionary optimization; distributed cogeneration; optimal operation
►▼ Show Figures 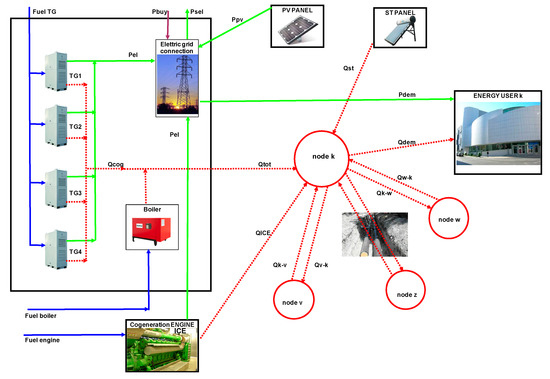