What Makes Coopetition Successful? An Inter-Organizational Side Analysis on Coopetition Critical Success Factors in Oil and Gas Distribution Networks

Are Nano-Composite Coatings the Key for Photovoltaic Panel Self-Maintenance: An Experimental Evaluation

This article shows the influence of an anti-fouling nano-coating on the electrical energy produced by a string of photovoltaic modules. The coating effect was evaluated comparing the energy produced by two strings of the same PV power plant: one of them was cleaned and the other was cleaned and treated with the coating before the monitoring campaign. The PV plant is located in Modena, north of Italy. A first monitoring campaign of nine days after the treatment shows that the treatment increases the energy production on the PV arrays by about 1.82%. Results indicate that the increase is higher during sunny days with respect to cloudy days. A second monitoring campaign of the same length, but five months later, shows that the energy gain decreases from 1.82% to 0.69% due to the aging of the coating, which is guaranteed for one year by the manufacturer. A technical-economical analysis demonstrates that at the moment the yearly economic gain is 0.43 € per square meter of panel and the cost of the treatment is about 1 € per square meter. However, large scale diffusion can reduce the production cost and thus increase the affordability of the coating. View Full-Text
Keywords: photovoltaic; antistatic; hydrophilic; optical losses; photo-catalyst photovoltaic; antistatic; hydrophilic; optical losses; photo-catalyst
►▼ Show Figures 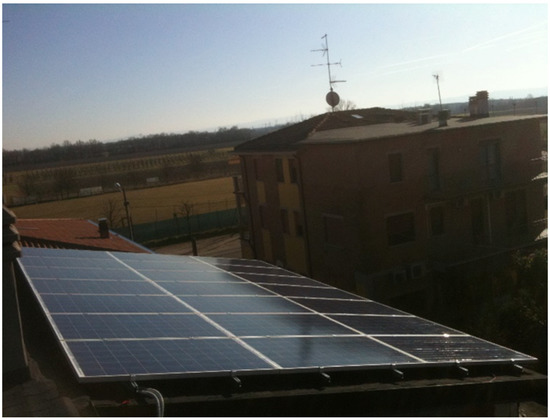