Field Investigation of Hydraulic Fracturing in Coal Seams and Its Enhancement for Methane Extraction in the Southeast Sichuan Basin, China
Previous Article in Journal

Are Nano-Composite Coatings the Key for Photovoltaic Panel Self-Maintenance: An Experimental Evaluation

This paper aims to contribute to developing a potential combined cycle air-breathing engine integrated into an aircraft design, capable of performing flight profiles on a commercial scale. This study specifically focuses on the single expansion ramp nozzle (SERN) and aircraft-engine integration with an emphasis on the combined cycle engine integration into the conceptual aircraft design. A parametric study using computational fluid dynamics (CFD) have been employed to analyze the sensitivity of the SERN’s performance parameters with changing geometry and operating conditions. The SERN adapted to the different operating conditions and was able to retain its performance throughout the altitude simulated. The expansion ramp shape, angle, exit area, and cowl shape influenced the thrust substantially. The internal nozzle expansion and expansion ramp had a significant effect on the lift and moment performance. An optimized SERN was assembled into a scramjet and was subject to various nozzle inflow conditions, to which combustion flow from twin strut injectors produced the best thrust performance. Side fence studies observed longer and diverging side fences to produce extra thrust compared to small and straight fences. View Full-Text
Keywords: scramjet; single expansion ramp nozzle; hypersonic aircraft; combined cycle engines scramjet; single expansion ramp nozzle; hypersonic aircraft; combined cycle engines
►▼ Show Figures 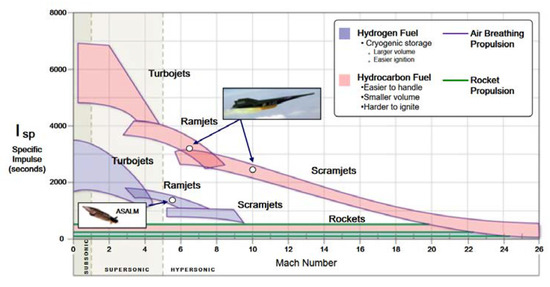