Differences in the Levels of Physical Activity, Mental Health, and Quality of Life of Elderly Koreans with Activity-Limiting Disabilities
Next Article in Special Issue

The Global Prevalence of Anxiety Among Medical Students: A Meta-Analysis

Medical schools around the world aim to train and produce competent and empathetic physicians to help the sick, advance medical knowledge, and promote public health [1]. However, medical education is considered to be one of the most academically and emotionally demanding training programs out of any profession [2], and consequently, the time and emotional commitment necessary for medical students to devote to their training is extensive. Such demands and stress cause a negative effect on the students’ psychological well-being [3], and can precipitate depression and anxiety [4]. Anxiety, although as common and arguably as debilitating as depression [5], has garnered less attention and is often undetected and undertreated [6] in the general population. In addition to intense feelings of fear or panic [7], sufferers of anxiety can experience other physiological symptoms including fatigue, dizziness, headaches, nausea, abdominal pain, palpitations, shortness of breath, and urinary incontinence [8]. Anxiety can also impair goal-directed attention and concentration [9], working memory [10], and perceptual-motor function [11], all of which are important domains which enable medical students and physicians to provide safe and efficacious medical care to patients.
In the current literature, anxiety among medical students is less studied than depression. A 2014 systematic review of the prevalence of anxiety among medical students outside of North America found a large range of prevalence between 7.7% and 65.5% across 11 studies [12]. The relatively small number of studies reviewed in Hope’s study was due to the fact that it included medical students in Europe and English speaking countries outside North America. Anxiety in medical students warrants wider awareness and greater attention. It can negatively affect academic performance, dropout rates and professional development [1]. Ultimately, it could also have implications for patient care since a previous study found that anxious medical students were less empathetic and less enthusiastic when caring for patients with chronic illness [1]. Quality of patient care suffers as doctors with anxiety tend to demonstrate poor work efficacy [13].
To the best of our knowledge, there has not been a meta-analysis of the global prevalence of anxiety among medical students published in the literature. We conducted this study with the aims of bridging this gap by estimating the global prevalence of anxiety among medical students, as well as identifying epidemiological and social factors associated with anxiety in medical students in order to identify at-risk students and provide timely assistance and intervention.

A review protocol was not registered in any database before the initiation of this study.

We conducted our initial literature search in February 2019. We applied a standardized search strategy (see Search strategy) to the following databases: (i) MEDLINE from 1946 to March 2019; (ii) PsycINFO from 1806 to March 2019, and (iii) Embase, from 1980 to March 2019. In addition, we screened the reference lists of identified articles to identify additional relevant articles. Searches were last updated in March 2019.

We excluded studies with the following characteristics: (i) did not give an aggregate prevalence of anxiety among medical students; (ii) had grouped veterinary medicine students as being part of medical students; (iii) provided insufficient information to calculate aggregate prevalence; (iv) published articles were inaccessible for full review, and (vi) interventional studies, case reports, case series and commentaries. We also did not consider studies with outcome measures of test anxiety and death anxiety. This was because we considered these measures of anxiety to be situation-specific and issue-specific which did not measure the general state of anxiety which we were interested in. We also excluded studies which measured anxiety during or after a major event such as a war [14], natural disaster [15] or a disease epidemic [16,17] due to the confounder effect of such events.

Two of us (T.T.-C.Q. and C.S.-H.H.) carried out the initial selection and vetting of the articles according to the titles and abstracts independently. Irrelevant articles were excluded. We then retrieved the full texts of the remaining articles and appraised the studies based on their study design and evaluated them against the inclusion and exclusion criteria independently. We resolved any differences of opinion on the inclusion of articles in discussions with R.C.-M.H. The selection process, based on the Preferred Reporting Items for Systematic Reviews and Meta-Analyses (PRISMA) guidelines [18], is detailed in Figure 1. The PRISMA checklist for this meta-analysis is shown in Figure S1.

Two of us (T.T.-C.Q. and W.W.-S.T.) further extracted the data reported by the selected articles, and documented the following details in a standardized table: (i) information of publication (last name of first author, year and location of study); (ii) the sample size of the study; (iii) prevalence of anxiety in medical students and in associated sub-groups if available; (iv) instrument used to assess anxiety; (v) mean age of sample size; (vi) proportion of female and single medical students, and (vii) prevalence of anxiety in non-medical students if available. For studies reporting prevalence at different periods in time within the same sample, the estimate at baseline was extracted except where more informative estimates were provided at a later stage. To appraise the quality of the selected studies, we adopted an adapted version of the Newcastle-Ottawa cohort scale for cross-sectional studies [19]. This adapted scale takes into consideration the selection of samples, comparability of subgroups and evaluation of outcome measures. Using this scale, we scored each study independently. We then reconciled scoring differences through discussion.

We utilized the software Comprehensive Meta-Analysis (CMA) Version 2.0 (Biostat, Inc., Englewood, NJ, USA) to perform the statistical analyses. Before statistical analysis was carried out, we randomized all articles by blinding the title of the articles and the names of the authors and the journal. The selected studies reported the dichotomous variable of anxiety being present or absent in medical students based on the study authors’ defined cut off score for the selected screening instruments. Using the random-effects model, we then calculated the aggregate prevalence of anxiety, the corresponding p-value and 95% confidence interval (CI), the Cochran’s Q-statistic and its p-value. We used the random-effects model due to the expected heterogeneity across the studies and also because it considers subject-specific effects [20,21]. We used the I2 value to assess heterogeneity among studies. When significant heterogeneity was identified, we ran a meta-regression using the random-effects model to study the impact of moderator variables on the prevalence of anxiety in medical students. For studies comparing medical students with non-medical students, we calculated the summary odds ratio (OR) and reported the corresponding p-value, 95% CI and Z-value. Statistical tests were two-tailed, and we set the level of significance at 5%. We evaluated publication bias using the Egger’s regression method [22]. If significant publication bias was present, we would perform the classic fail-safe test to determine the number of missing studies required for the p-value of publication bias among the observed studies to approximate > 0.05.

We performed subgroup analyses to study the effects of gender and year of study on the prevalence of anxiety among medical students. We also grouped studies by continent based on the classification provided by United Nations Standard Country or Area Codes for Statistical Use [23]. We differentiated Middle Eastern countries from Asian countries based on traditional definitions. We classified the countries Bahrain, Cyprus, Egypt, Iran, Iraq, Israel, Jordan, Kuwait, Lebanon, Oman, Palestine, Qatar, Saudi Arabia, Syria, Turkey, United Arab Emirates, and Yemen as countries in the Middle East.

Using the Newcastle-Ottawa cohort scale for cross-sectional studies [19] to evaluate the quality of studies, all sixty-nine studies scored at least 7 points out of a possible 10 points. This quality appraisal, in addition to the provision of ethical approval for each study, is detailed in a table in Table S2.

Analyzing the global prevalence rate of anxiety among medical students using the random-effects model, we found the pooled prevalence based on the sixty-nine studies to be 33.8% (95% CI: 29.2–38.7%; I2 = 98.79). Figure 2 illustrates the forest plot of the sixty-nine studies reporting the prevalence of anxiety among medical students. As there is substantial heterogeneity among the studies analyzed (I2 = 98.79), we carried out meta-regression against mean age (β = 0.024 p = 0.78) and proportion of female students (β = 0.21, p = 0.80), but none of these moderators had a statistically significant effect on the prevalence of anxiety.

In conclusion, in this meta-analysis, we found the prevalence of anxiety to be 33.8% among medical students globally, which is substantially higher than the general population. Further research should build on our findings and identify risk factors of anxiety in medical students in their respective socio-cultural contexts so that effective screening strategies can be developed to identify and assist affected medical students. Anxiety has dire implications for both the medical student (a future physician) and patients. Administrators and the leaders of medical schools should take the lead in destigmatizing mental illnesses and promoting help-seeking behaviors when students are stressed and anxious.

This study received funding from the National Social Science Fund (General Project of Education) (No. BBA170063).

Standardized search strategy for Review of the Literature on Anxiety in Medical Students.
Search fields: Title and Abstract only
Search terms: (Medical student* OR Medical undergraduate* OR Student doctor* OR Trainee doctor*) and (Anxiety* OR Anxious* OR Nervous*) 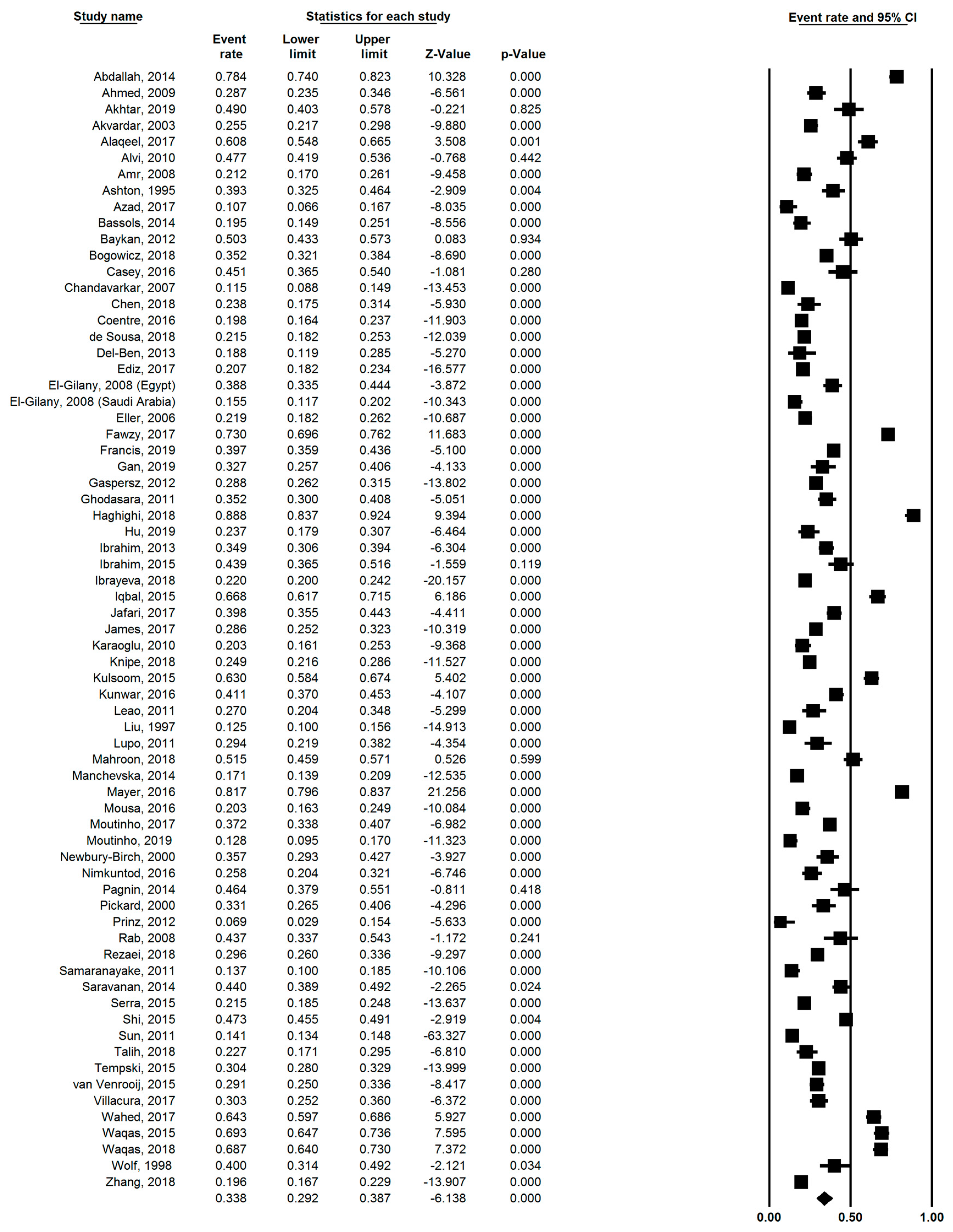