Deriving A Drinking Water Guideline for A Non-Carcinogenic Contaminant: The Case of Manganese
Next Article in Special Issue

Effect of an Intervention Program Based on Active Video Games and Motor Games on Health Indicators in University Students: A Pilot Study
Previous Article in Journal

Effects of Mind–Body Movements on Balance Function in Stroke Survivors: A Meta-Analysis of Randomized Controlled Trials

Objective: We performed a systematic review with meta-analysis and meta-regression to determine if mind–body movements (MBM) could be effective in rehabilitating balance function among stroke survivors. Methods: A literature search was conducted using major Chinese and English electronic databases from an inception until January 2018. Randomized controlled studies were included in our meta-analysis. Data was independently extracted by two review authors using a pre-developed table and confirmed by a third party to reach a consensus. Pooled effect size (Hedge’s g) was computed while the random-effect model was set. Results: The meta-analytic results showed a significant benefit of the MBM intervention on increased balance function compared to the control groups (Hedge’s g = 1.59, CI 0.98 to 2.19, p < 0.001, I2 = 94.95%). Additionally, the meta-regression indicated that the total number of sessions (β = 0.00142, 95% CI 0.0039 to 0.0244, p = 0.0067) and dose of weekly training (β = 0.00776, 95% CI 0.00579 to 0.00972, p = 0.00) had significantly positive effects on balance function. Conclusions: The study encouraging findings indicate the rehabilitative effect of a MBM intervention for balance function in stroke survivors. However, there were significant limitations in the design among several of the included trials. Additional studies with more robust methodologies are needed to provide a more definitive conclusion. View Full-Text
Keywords: Tai Chi; Yoga; mindfulness movement; stroke; rehabilitation Tai Chi; Yoga; mindfulness movement; stroke; rehabilitation
►▼ Show Figures 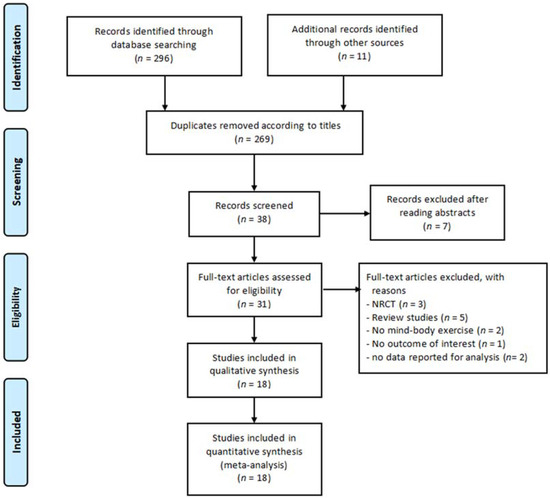