Autotrophic vs. Heterotrophic Cultivation of the Marine Diatom Cyclotella cryptica for EPA Production

The demand for sustainable and environmentally friendly food sources and food ingredients is increasing, and microalgae are promoted as a sustainable source of essential and bioactive lipids, with high levels of omega-3 fatty acids (ω-3 FA), comparable to those of fish. However, most FA screening studies on algae are scattered or use different methodologies, preventing a true comparison of its content between microalgae. In this work, we used gas-chromatography mass-spectrometry (GC-MS) to characterize the FA profile of seven different commercial microalgae with biotechnological applications (Chlorella vulgaris, Chlorococcum amblystomatis, Scenedesmus obliquus, Tetraselmis chui, Phaeodactylum tricornutum, Spirulina sp., and Nannochloropsis oceanica). Screening for antioxidant activity was also performed to understand the relationship between FA profile and bioactivity. Microalgae exhibited specific FA profiles with a different composition, namely in the ω-3 FA profile, but with species of the same phylum showing similar tendencies. The different lipid extracts showed similar antioxidant activities, but with a low activity of the extracts of Nannochloropsis oceanica. Overall, this study provides a direct comparison of FA profiles between microalgae species, supporting the role of these species as alternative, sustainable, and healthy sources of essential lipids. View Full-Text
Keywords: microalgae; lipidomics; lipids; fatty acids; mass spectrometry; GC-MS microalgae; lipidomics; lipids; fatty acids; mass spectrometry; GC-MS
►▼ Show Figures 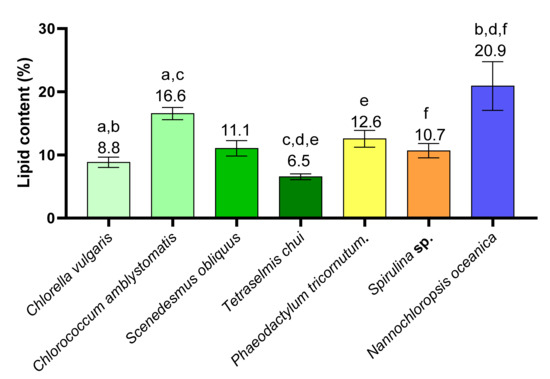