Identification of Prostaglandin Pathway in Dinoflagellates by Transcriptome Data Mining

Marine-derived microorganisms are a valuable source of novel bioactive natural products. Asperphenin A is a lipopeptidyl benzophenone metabolite isolated from large-scale cultivation of marine-derived Aspergillus sp. fungus. The compound has shown potent antiproliferative activity against various cancer cells. However, the underlying mechanism of action remained to be elucidated. In this study, we demonstrated the antitumor activity and molecular mechanism of asperphenin A in human colon cancer cells for the first time. Asperphenin A inhibited the growth of colon cancer cells through G2/M cell cycle arrest followed by apoptosis. We further discovered that asperphenin A can trigger microtubule disassembly. In addition to its effect on cell cycle, asperphenin A-induced reactive oxygen species. The compound suppressed the growth of tumors in a colon cancer xenograft model without any overt toxicity and exhibited a combination effect with irinotecan, a topoisomerase I inhibitor. Moreover, we identified the aryl ketone as a key component in the molecular structure responsible for the biological activity of asperphenin A using its synthetic derivatives. Collectively, this study has revealed the antiproliferative and antitumor mechanism of asperphenin A and suggested its possibility as a chemotherapeutic agent and lead compound with a novel structure. View Full-Text
Keywords: marine microorganism metabolite; Aspergillus sp. fungus; asperphenins; colon cancer; antimitotic agent; tubulin polymerization marine microorganism metabolite; Aspergillus sp. fungus; asperphenins; colon cancer; antimitotic agent; tubulin polymerization
►▼ Show Figures 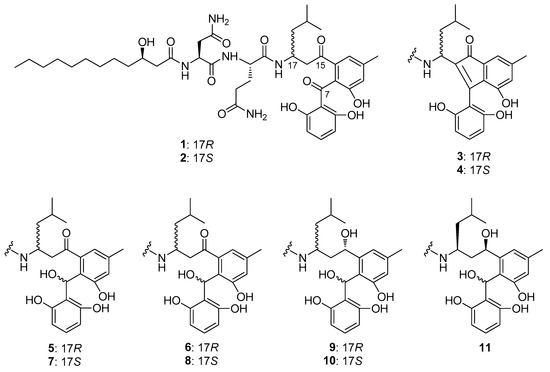