Type II collagen is an important component of cartilage; however, little is known about its effect on skin wound healing. In this study, type II collagen was extracted from the cartilage of Acipenser baerii and its effect on in vitro and in vivo wound healing was compared to type I collagen derived from tilapia skin. Sturgeon cartilage collagen (SCC) was composed of α1 chains and with a thermal denaturation (Td) at 22.5 and melting temperature (Tm) at 72.5 °C. Coating SCC potentiated proliferation, migration, and invasion of human dermal fibroblast adult (HDFa) cells. Furthermore, SCC upregulated the gene expression of extracellular matrix (ECM) components (col Iα1, col IIIα1, elastin, and Has2) and epithelial-mesenchymal transition (EMT) molecules (N-cadherin, Snail, and MMP-1) in HDFa. Pretreatment with Akt and mitogen-activated protein kinase (MAPK) inhibitors significantly attenuated the HDFa invasion caused by SCC. In mice, the application of SCC on dorsal wounds effectively facilitated wound healing as evidenced by 40–59% wound contraction, whereas the untreated wounds were 18%. We observed that SCC reduced inflammation, promoted granulation, tissue formation, and ECM deposition, as well as re-epithelialization in skin wounds. In addition, SCC markedly upregulated the production of growth factors in the dermis, and dermal and subcutaneous white adipose tissue; in contrast, the administration of tilapia skin collagen (TSC) characterized by typical type I collagen was mainly expressed in the epidermis. Collectively, these findings indicate SCC accelerated wound healing by targeting fibroblast in vitro and in vivo. View Full-Text
Keywords: type II collagen; sturgeon cartilage; by-product; wound healing; fibroblast type II collagen; sturgeon cartilage; by-product; wound healing; fibroblast
►▼ Show Figures 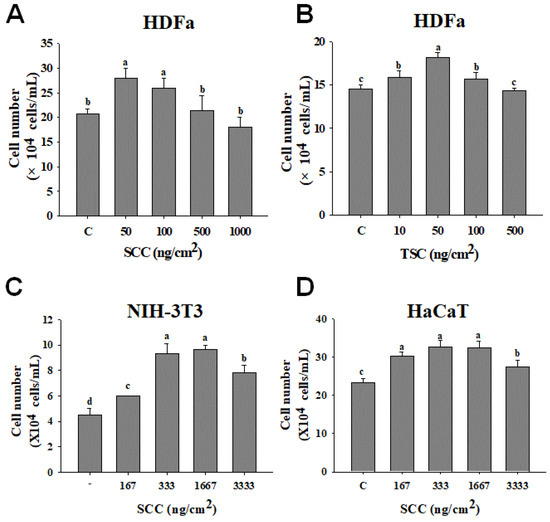