Microcystins are a family of chemically diverse hepatotoxins produced by distantly related cyanobacteria and are potent inhibitors of eukaryotic protein phosphatases 1 and 2A. Here we provide evidence for the biosynthesis of rare variants of microcystin that contain a selection of homo-amino acids by the benthic cyanobacterium Phormidium sp. LP904c. This strain produces at least 16 microcystin chemical variants many of which contain homophenylalanine or homotyrosine. We retrieved the complete 54.2 kb microcystin (mcy) gene cluster from a draft genome assembly. Analysis of the substrate specificity of McyB1 and McyC adenylation domain binding pockets revealed divergent substrate specificity sequences, which could explain the activation of homo-amino acids which were present in 31% of the microcystins detected and included variants such as MC-LHty, MC-HphHty, MC-LHph and MC-HphHph. The mcy gene cluster did not encode enzymes for the synthesis of homo-amino acids but may instead activate homo-amino acids produced during the synthesis of anabaenopeptins. We observed the loss of microcystin during cultivation of a closely related strain, Phormidium sp. DVL1003c. This study increases the knowledge of benthic cyanobacterial strains that produce microcystin variants and broadens the structural diversity of known microcystins. View Full-Text
Keywords: adenylation domain; hepatotoxin; cyanobacteria; nonribosomal peptide synthetase (NRPS); polyketide synthase (PKS); mass spectrometry adenylation domain; hepatotoxin; cyanobacteria; nonribosomal peptide synthetase (NRPS); polyketide synthase (PKS); mass spectrometry
►▼ Show Figures 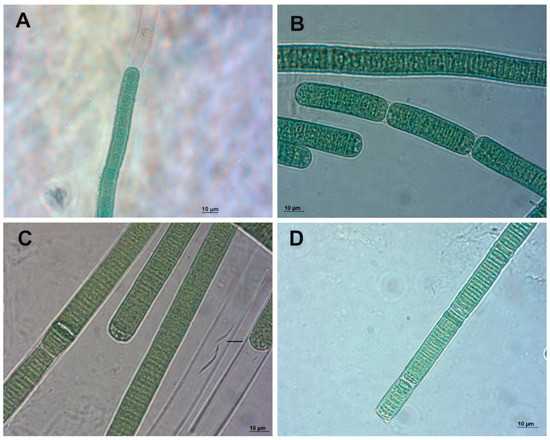