Development of a Mucoadhesive and an in Situ Gelling Formulation Based on κ-Carrageenan for Application on Oral Mucosa and Esophagus Walls. II. Loading of a Bioactive Hydroalcoholic Extract
Previous Article in Special Issue

The presence of two known anthraquinones, Lupinacidin A and Galvaquinone B, which have antitumor activity, has been identified in the sea anemone (Gyractis sesere) from Easter Island. So far, these anthraquinones have been characterized from terrestrial and marine Actinobacteria only. In order to identify the anthraquinones producer, we isolated Actinobacteria associated with the sea anemone and obtained representatives of seven actinobacterial genera. Studies of cultures of these bacteria by HPLC, NMR, and HRLCMS analyses showed that the producer of Lupinacidin A and Galvaquinone B indeed was one of the isolated Actinobacteria. The producer strain, SN26_14.1, was identified as a representative of the genus Verrucosispora. Genome analysis supported the biosynthetic potential to the production of these compounds by this strain. This study adds Verrucosispora as a new genus to the anthraquinone producers, in addition to well-known species of Streptomyces and Micromonospora. By a cultivation-based approach, the responsibility of symbionts of a marine invertebrate for the production of complex natural products found within the animal’s extracts could be demonstrated. This finding re-opens the debate about the producers of secondary metabolites in sea animals. Finally, it provides valuable information about the chemistry of bacteria harbored in the geographically-isolated and almost unstudied, Easter Island. View Full-Text
Keywords: Easter Island; Actinobacteria; anthraquinones; symbionts; sea anemone; marine invertebrates; spectroscopy; chromatography Easter Island; Actinobacteria; anthraquinones; symbionts; sea anemone; marine invertebrates; spectroscopy; chromatography
►▼ Show Figures 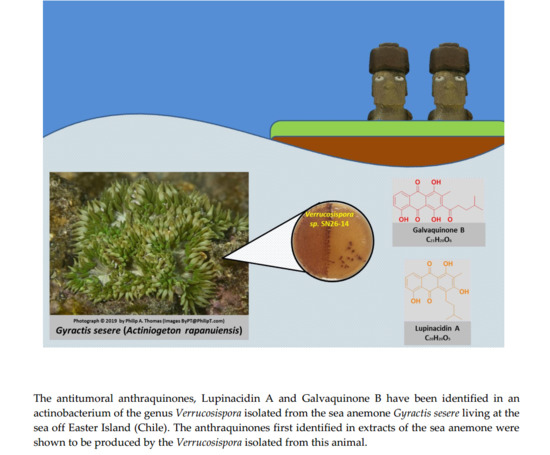