Submit to Medicina Review for Medicina 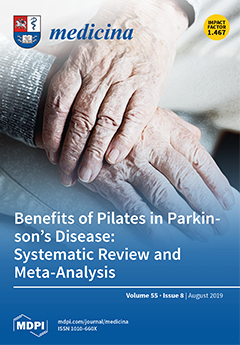 Cover Story (view full-size image): Parkinson’s disease (PD) is the second most common neurodegenerative disease in the world. The impairment caused by PD is largely due to motor dysfunction. In this study, we reviewed the scientific evidence regarding the benefitcial effects that the practice of Pilates could have in people affected by PD. We showed in detail the characteristics of the interventions developed so far, as well as synthesized the main findings. Further, we performed a meta-analysis, which has yielded interesting conclusions View Paper here.
Previous Issue
Volume 55, July
Next Issue
Volume 55, September
We use cookies on our website to ensure you get the best experience. Read more about our cookies here.
Accept
We have just recently launched a new version of our website. Help us to further improve by taking part in this short 5 minute survey here. here.
Never show this again