Geomagnetic storms—triggered by the interaction between Earth’s magnetosphere and interplanetary magnetic field, driven by solar activity—are important for many Earth-bound aspects of life. Serious events may impact the electroenergetic infrastructure, but even weaker storms generate noticeable irregularities in the density of ionospheric plasma. Ionosphere electron density gradients interact with electromagnetic radiation in the radiofrequency domain, affecting sub- and trans-ionospheric transmissions. The main objective of the manuscript is to find key features of the storm-induced plasma density behaviour irregularities in regard to the event’s magnitude and general geomagnetic conditions. We also aim to set the foundations for the mid-latitude ionospheric plasma density now-casting irregularities. In the manuscript, we calculate the GPS+GLONASS-derived rate of TEC (total electron content) index (ROTI) for the meridional sector of 10–20 E, covering the latitudes between 40 and 70 N. Such an approach reveals equatorward spread of the auroral TEC irregularities reaching down to mid-latitudes. We have assessed the ROTI performance for 57 moderate-to-severe storms that occurred during solar cycle 24 and analyzed their behaviors in regard to the geomagnetic conditions (described by Kp, Dst, AE, Sym-H and PC indices). View Full-Text
Keywords: ionosphere; geomagnetic storms; GNSS; TEC; ROTI; real time ionosphere; geomagnetic storms; GNSS; TEC; ROTI; real time
►▼ Show Figures 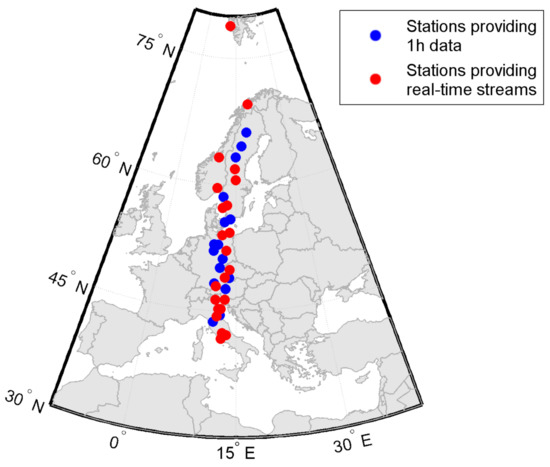